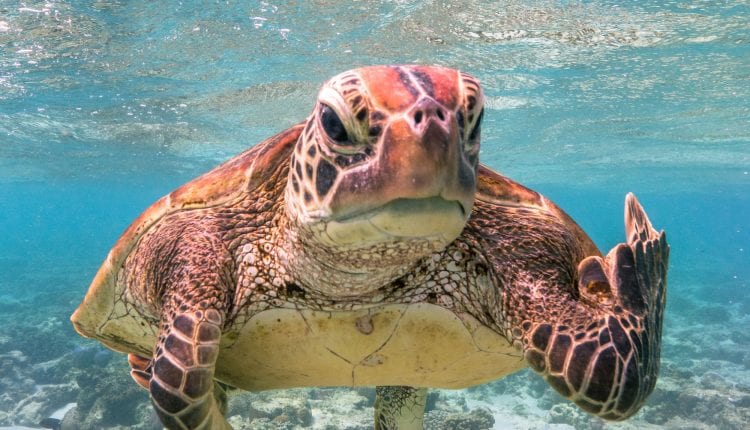 In what has become a popular annual tradition, the Comedy Wildlife Photography Awards committee has announced the winners of its all-comers competition.

The overall winner of this year’s competition is Mark Fitzpatrick, for his photograph entitled Terry the Turtle Flipping the Bird.

Up against 7,000 entries from all over the world, Mark’s image (top of page) emerged as a clear favourite with the judges. The image was captured when he was swimming with the turtles off Lady Elliot Island in Queensland, Australia.

Mark said: “A huge thank you to the Comedy Wildlife Photography Awards, I’m stoked and honoured to be awarded the Comedy Wildlife Photographer of the Year for 2020. It’s been amazing to see the reaction to my photo of Terry the Turtle Flipping the Bird, with Terry giving people a laugh in what has been a difficult year for many, as well as helping spread an important conservation message.

“Hopefully Terry the Turtle can encourage more people to take a moment and think about how much our incredible wildlife depend on us and what we can do to help them. Flippers crossed that this award puts Terry in a better mood the next time I see him at Lady Elliot Island!”

As the 2020 Comedy Wildlife Photographer of the Year, Mark wins a once-in-a-lifetime safari in the Masai Mara, Kenya, with Alex Walker’s Serian, a unique handmade trophy from the Wonder Workshop in Tanzania, a photography bag from Think Tank, and a Nikon camera.

The Comedy Wildlife Photography Awards, founded by Paul Joynson-Hicks and Tom Sullam, both professional photographers and passionate conservationists, is a global, online and free-to-enter photography competition, showcasing seriously funny images of the earth’s most amazing wildlife.

In addition to providing some light-hearted relief, the competition aims to highlight the extremely important message of wildlife conservation in an engaging and positive way, working with the main competition partner – The Born Free Foundation. For more information about the competition and its conservation message, please go to: www.comedywildlifephoto.com

The Affinity Photo People’s Choice Award, voted for by the public went to Roland Kranitz for his charming shot of a singing Spermophile taken in Hungary entitled ‘O Sole Mio!’.

The Animals of the Land Category Award was won by Charlie Davidson with ‘Almost time to get up’ of the back end of a raccoon seemingly stuck in the entrance of his nest in a hollow tree trunk.

Other category winners included Tim Hearn’s mesmerizing shot ‘Hide and Seek’ of an Azure Damselfly doing a brilliant impression of Beaker from The Muppets, hiding behind a stem of marsh grass which won the Spectrum Photo Creatures of the Air Category Award, and Daisy Gilardin, was awarded the Amazing Internet Portfolio Award for ‘Deadly Fart’ a series of four wonderful images depicting a playful brown bear having fun in Alaska.

This year, the winner of the Video Category Award went to Dipali Shah whose awesome clip of a giraffe scratching his back from inside a bush topped this category, and youngster Olin Rogers was triumphant in the Think Tank Photo Junior Category, with his shot of two lion cubs playing in Hwange National Park, Zimbabwe.

The Comedy Wildlife Photography Awards has become a popular annual tradition, and you can see the winners of the 2020 competition announced by the committee at the website here.