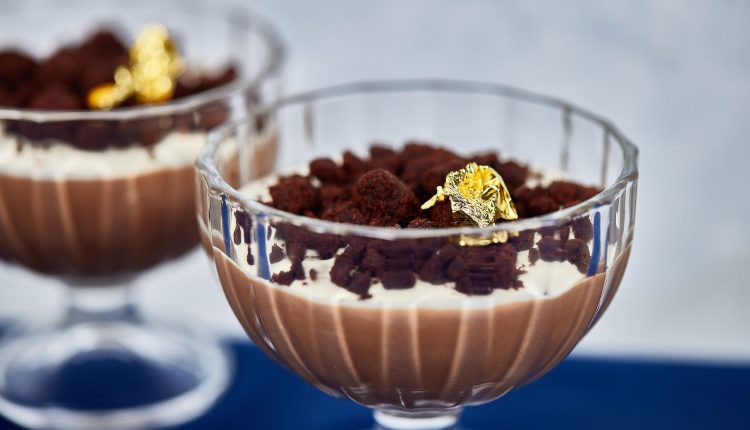 It’s World Chocolate Day on July 7th, the day when we celebrate the delicious product of the cocoa bean.

The cacao plant from which cocoa pods come has been cultivated since around 1500 BC, and Mayans from 300BC to 500AD used cocoa beans as a form of currency. Chocolate drinks spread into South America and Europe, and by 1765 the first chocolate company in North America, Baker’s was opened.

The first company to sell solid chocolate for eating was JS Fry in the 1830s, and by the late 1800s, Cadbury, Nestlé and Hersheys’s were all doing big business.

By the 2000s, chocolate had become part of the trend toward fusion cuisine, pairing up with exotic spices such as curry, saffron, lemongrass, coffee beans and much more. Many people now seek chocolate with a high percentage of cacao for its antioxidant health benefits.

To celebrate the day we have a great recipe for you from Artisan Coffee Co. (It’s also National Macaroni Day on July 7th, but we’re sticking to chocolate…)

Artisan Coffee Co’s delicious, easy-to-make recipes have been crafted by founder and former double-Michelin starred chef, Ashley Palmer-Watts. This chocolate mousse crumble recipe shows how chocolate is the gift that never fails to keep on giving, providing that homemade chocolate hit that the day calls for.

*If you can’t find whipping cream you can substitute with 1/2 single cream and 1/2 double cream.

01
To make the mousse
Place the gelatine into cold water to allow to bloom, set aside for later.

03
In a small pan gently heat the milk to 75°c. Gently squeeze the water out of the gelatine and air into the warmed milk.

04
Now pour half the milk into the chocolate and stir well to incorporate. Repeat adding the remaining milk and stir well until fully incorporated. Place to one side to allow to cool to 35-40°c.

05
Whip the cream to soft peaks and fold one third of the cream in to the cooled chocolate mix. Next add one more third, gently incorporating to the mix and finally add the remainder of the cream.

06
Divide the mousse into 4-6 glasses and place in fridge to set.

07
To make the chocolate crumble
Pre-heat the oven to 160°c.

In a bowl combine the sugar, flour, cocoa powder, salt and mix well.

08
Melt the buttered pour over the flour mix.

09
Using a wooden spoon mix to disperse the butter and mix and break down the large chunks of crumble.

10
Transfer onto a baking sheet lined with greaseproof baking paper.

11
Spread into a thin even layer and using your fingers break down any larger chunks.

12
Bake in a pre-heated oven at 160°c for 12 minutes, turning the tray after 6 minutes. Check the crumble is starting to dry out and harden, depending on your oven it might require an extra 2 minutes in the oven.

13
Remove the tray from the oven and allow the crumble mix to fully cool. Transfer to an airtight container.

14
To make the espresso cream
In a bowl combine the whipping cream, sugar and cooled espresso.

15
Whisk until the texture starts to thicken but is still pourable.

16
To serve
Pour a thin layer over the set chocolate mousse, sprinkle with chocolate crumble and serve.

Summer Tomato and Lentil Salad for a Tasty Cooling Treat

How to Make a Simple Home-made Elderflower Cordial