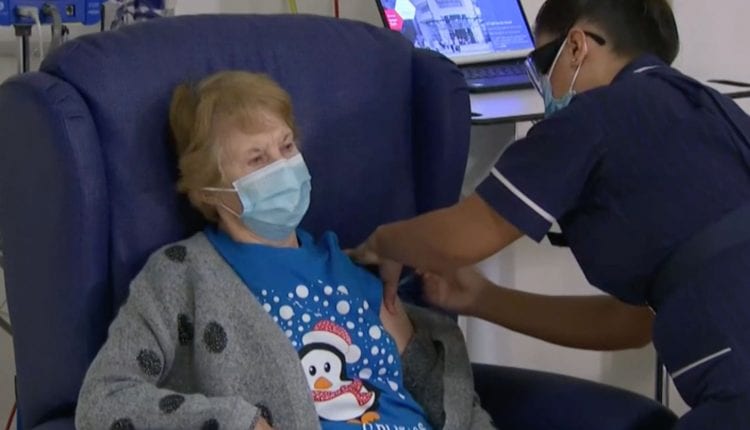 As the Pfizer/BioNTech coronavirus vaccine is rolled out, experts are warning of ‘fake news’ designed to put people off having the jab.

Rumours about possible side-effects and way-out conspiracy theories are being spread mainly through social media, but doctors warn that deciding not to have the vaccine is far more dangerous than any probably side-effects. One in 1,000 people infected with coronavirus in the UK have died, a known threat that any possible risks of a vaccine have to be balanced against.

The coronavirus vaccine does have some common, mild side-effects, as does the influenza vaccine. These could include pain at the injection site, headaches, chills and muscle pain, which could affect around one in 10 people. These are seen as effects of the immune system getting into gear, and are easily treated with paracetamol.

The seasonal flu jab has been linked to about a one-in-a-million chance of the nerve disorder Guillain-Barre syndrome, although even more cases are caused by the flu virus itself.

Also, two NHS workers have had allergic reactions after having the vaccine, and the Medicines and Healthcare Products Regulatory Agency has now stated that people with a history of significant allergic reactions to medicine or foods should not have the Pfizer/BioNTech Covid jab.

The two NHS workers had an anaphylactoid reaction – much milder than anaphylaxis – which involves a skin rash, breathlessness and sometimes a drop in blood pressure. Both have a history of serious allergies and carry EpiPens and recovered completely after treatment.

About one in 900,000 people have severe allergic reactions, known as anaphylaxis, to a vaccine.

Prof Peter Openshaw, immunologist at Imperial College London, said: “The fact that we know so soon about these two allergic reactions and that the regulator has acted on this to issue precautionary advice shows that this monitoring system is working well.”

But fake news on social media claims that there are other more serious side-effects. One post showed an image of a woman who had participated in a vaccine trial and developed severe sores on her feet – it later transpired that she had not been given the vaccine, but a salt-water placebo, and the cause of the sores was unrelated.

Dr Penny Ward, from King’s College London and the Faculty of Pharmaceutical Medicine., said: “The MHRA are very experienced, we can be reassured if the regulator says the benefits clearly outweigh the risks, that should be the end of it really.” She added that there will be cases where somebody has a vaccination one day and then, shortly after, has a serious health problem that would have happened whether they were vaccinated or not. “The truth is that people get sick all the time. Every five minutes in the UK one person has a heart attack and one person has a stroke. More than 600,000 people die each year. We could see things that happen by unhappy chance.”

So far the NHS vaccination programme has been limited to 70 special vaccination centres, but it is expected to be extended to around 200 GP surgeries next week, with around 1,000 more to follow once additional shipments are received from Belgium.

Over-80s will be invited for their vaccinations first – plans to roll out the vaccine to care homes have been delayed, because the low temperature storage required means that people have to travel to a vaccination point for the jab. Once unpacked, the vaccine lasts only three days.

A second vaccination will be required two weeks after the first. It’s hoped that 2.5m people will have received their two vaccinations by Christmas.

Margaret Keenan, 91, was the first person in the world outside clinical tests to receive the Pfizer COVID-19 vaccine in University Hospital Coventry o Tuesday (picture top of page).

Health Secretary Matt Hancock said the vaccine programme marks the “start of the fightback against our common enemy, the coronavirus”, adding that there was no need to apply for it as the NHS would contact people when they were eligible. He stressed that the vaccination was not compulsory, but warned that there was still a long way to go before things could return to normal, with worrying signs of growing infections in Essex, London and Kent, and worries about a third wave in January.

See also: Coronavirus Vaccine Approved for Use in UK

As the Pfizer/BioNTech coronavirus vaccine is rolled out, experts are warning of ‘fake news’ designed to put people off having the jab. Find out more about the NHS vaccination programme here.

How to Build a Home That Saves Energy, Money and the World