Visit Edinburgh on a budget

Famed as a historic and awe-inspiring capital city, here is an insider’s guide to exploring Edinburgh on a budget 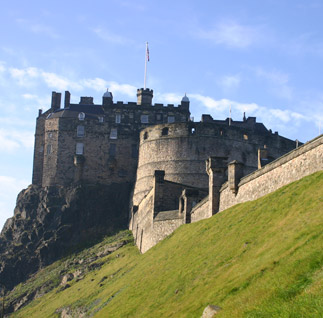 Culture
Easily the most iconic pile of bricks and mortar in the city is Edinburgh Castle, an imposing fortress perched on a ridge (AKA “the Mound”) above Princes’ Street Gardens.  Its esplanade hosts the Edinburgh Tattoo, a ceremonial display by military bands in full regalia. Leading down from the gates lies the Royal Mile, lined with souvenir shops to cater for all your kilt/ postcard/ genuine Highland toffee needs. Of greater interest are the underground vaults and passageways built beneath the Mound. Several companies offer guided tours of varying degrees of stomach-churning historical accuracy. Also worth a look is the Camera Obscura, a Victorian contraption which provides virtual tours of the city via projected periscope images. On its lower floors you’ll find a collection of mesmerising and sometimes disconcerting illusions.

Culture buffs will not be disappointed, with the National Museum of Scotland and the three National Galleries of Scotland all within easy reach of the city centre. The Museum holds an enormous permanent collection of artefacts relating to both Scottish and international history.

Budget tip: If you’re planning on diving into historic sightseeing, an Edinburgh Pass represents a good deal. It grants free entry to the city’s most popular attractions (except the castle, unfortunately). See http://www.edinburgh.org/pass for prices.

Explore
Edinburgh also offers plenty to the intrepid traveller who’s had as much adventure as they’re willing to take. A quick glance at a map proves there is no shortage of green spaces, the largest being Holyrood Park. This wild rugged expanse covers a large part of the city’s southeast side and has terrain to suit the enthusiastic rambler or casual stroller alike. At its heart lies Arthur’s Seat, an 800 foot high extinct volcano with spectacular views of the entire city and beyond.

The beach at Portobello is a pleasant place to take the sea air; the braver among you might like to take a dip in the cold North Sea. What’s definitely worth a try are the fish and chips  and Irn-Bru (the national soft drink) flavour ice cream available in beachside cafes. Along the promenade you’ll find another staple of the Scottish seaside experience, the amusements. More modern (think 1980’s) arcade shooters and slot machines are mixed with archaic penny-drops and ring-toss games.

If you want to relax, the Botanic Garden on Inverleith Row is as tranquil as attractions come. Within you’ll find exotic plants, sumptuous glasshouses, stunning scenery and a giant hedge.

Budget tip: Travelling to and from more distant parts of town is easy when using the buses, which are inexpensive, frequent and generally reliable. Day tickets are available if you plan to make multiple trips. Consider taking a picnic to any of the above to avoid paying for eating out.

Nightlife
The main hub of nightlife activity in Edinburgh is arguably the warren of alleys and curved backstreets branching out from Cowgate.  Plenty of pubs in this area hold live music and comedy gigs, especially during Festival season (August). The ghoulishly gothic Banshee Labyrinth on Nidry Street is a prime example, boasting a home cinema and frequent performances from local punk and metal groups. Dance music is well represented too, regular hip-hop and drum and bass nights are a common feature. George Street holds several watering holes, but they tend to be on the chi-chi side and hence expensive. However, the Dome and the Standing Order are worth a walk in for their jaw-dropping interiors alone.

Experience a Different Kind of Magic at a Disney Nature…

Viva Argentina: From wine tasting in Mendoza to tango in…

Budget tip: Entry prices for clubs are very time sensitive, particularly for the most popular venues. Arriving before midnight usually secures discounted or free entry, and many bars will offer drinks promotions on quieter nights of the week. To make the most of these offers.

All in all Edinburgh makes for a fun and affordable city break, especially compared to bigger and generally pricier capital cities like London and Paris. Expect prices to rise during the summer months, but you’ll be more than compensated by the flurry of activity and entertainment that is the Edinburgh Festival.