Valrhona to launch a completely new type of chocolate

Chocolate lovers will be excited to hear that Valrhona are to launch a brand new type of chocolate, blond 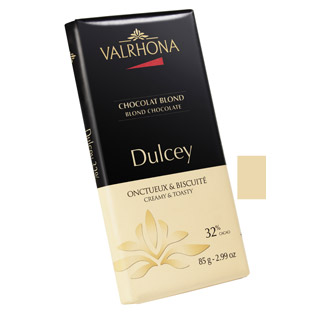 Where previously there was milk, dark and white chocolate, luxury French chocolatier Valrhona has developed a new exclusive: Blond.

One early spring morning 8 years ago, at Valrhona’s Ecole du Grand Chocolat, Frédéric Bau put some Ivoire chocolate in a bain marie as he prepared to demonstrate a recipe in front of pastry chefs from around the world. He used part of the chocolate for his recipe but, in a moment of absent-mindedness, completely forgot about the bain marie. Ten hours later the white chocolate had become blond, a color he had never seen.

The fragrance was extraordinary, it smelled of toasted Breton shortbread, caramelized milk and unrefined sugar and had a fresh-out-of-the-oven scent that was simply irresistible. He tasted it. To his pleasant surprise it was a pure delight, a treat that instantly took him back to his childhood, filled with happy memories. He closed his eyes and ecstatically savored that which had no name – he had just accidentally invented something new.

The next day, he tried to replicate his serendipitous accident. He succeeded and was filled with glee. This blond chocolate was a revelation – its natural color looked like nothing he’d ever seen. He brought it to his manager and to the company engineers.

They tasted it and immediately fell in love with it.But despite their best efforts, the recipe proved impossible to reproduce on a large scale. However, the Valrhona engineers were determined. Day after day, month after month, year after year, they worked with Frédéric Bau to replicate the unique, delicious flavor and the distinctive color of the blond chocolate and create a recipe that could be produced on a large scale so that everyone could taste it. Again and again they had to start over, but they never wavered in their patience and precision.

Fast forward. The engineers were still at it. They tested one process, then another, then invented yet another one.

Eight years later, they finally found the recipe. Inspired by Frédéric Bau’s original recipe and perfected by Valrhona experts, the first blond chocolate has unique characteristics. Dulcey is the fourth chocolate, opening up a new world to pastry chefs, chocolatiers and gourmets in gastronomy and the world over. First there was dark, milk and white – now, there is blond.﻿

Blond chocolate is due to launch in stores over the next few weeks.