Whether you’re a sports fan, interested in culture or looking for some luxury, Toronto offers something for everyone 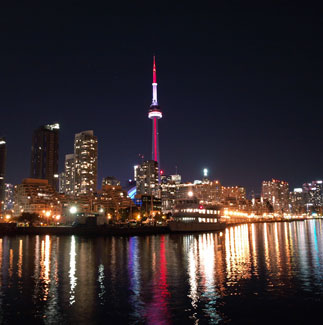 What to do?
A culturally diverse city with world-renowned opera, ballet and theatre, Toronto’s attractions offer something for every traveller. Of course you’ll want to check out the CN Tower, the Hockey Hall of Fame, the Art Gallery of Ontario, and the Eaton Centre shopping mall. But what about getting off the beaten track?

You’ll find Steamwhistle Brewery a hop, skip and a jump away from the CN Tower. Offering tours every 30 minutes, the brewery welcomes you to a unique premises including the Roundhouse heritage building. Tastings are, of course, recommended.

The Distillery Historic District is a collection of galleries, theatres, studios, restaurants and shops in Toronto’s trendy east end. Take in a production by the renowned Soulpepper Theatre Company, or sit and sip a coffee at Balzac café. Segway tours are a popular way to see all the hidden sights of the District.

Torontonians have fallen in love with the TIFF Bell Lightbox Theatre, which brings the spirit of Toronto’s International Film Festival programming to a daily schedule of films and exhibitions. You’ll want to visit this spectacular building if only to see it lit up in the evening.

Where to stay?
The trendy Cosmopolitan Hotel offers sleek accommodation in the heart of Toronto’s entertainment district. With a focus on Zen and rooms arranged according to feng shui principles, this is the ideal base for travelers looking to recharge at the end of a hard day’s exploration.

For a more classical view of Toronto, consider the Fairmont Royal York. Once the tallest building in the city, this tried and tested hotel puts you in the centre of the action.

If you want to be in the centre of things without the downtown bustle, consider a night of luxury of the Hazelton Hotel. Toronto’s first five-star accommodation, the Hazelton plays host to numerous celebrities annually during the film festival. With Yorkville as your base, you’ll still have the city at your fingertips – but in a proper Toronto neighbourhood with some of the city’s most upscale shops and eateries.

Where to eat?
Starfish Oyster Bed and Grill serves up seafood and charm in a casual fine dining atmosphere. Staff know their malpeques from their bluepoints – though the molluscs on offer at the restaurant tend to be a lot more interesting and diverse! Ask to chat with proprietor Paddy if he’s around. He’s a record-holding oyster shucker and his sticky toffee pudding rivals your gran’s.

The originators of Toronto’s most sought after pizza (at Pizzeria Libretto) have established a neighbourhood favourite with Enoteca Sociale. Styled as an Italian wine bar, this one offers some fantastic wines by the glass due to their unique preservation system. Pair a few samples with their authentic Roman cuisine and enjoy the laid back atmosphere with the locals.

Planning is the key to stress-free travelling with children