The Right Way to Eat Caviar 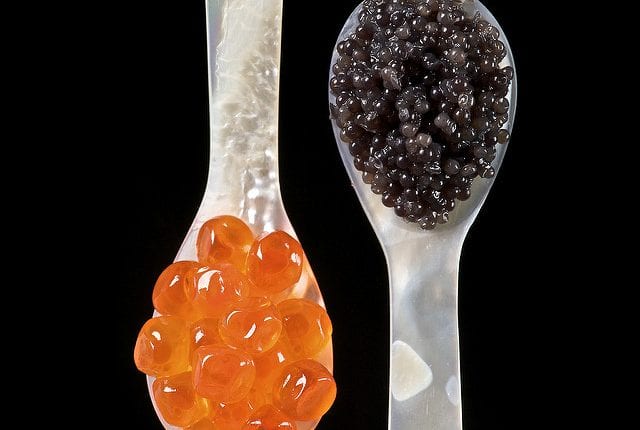 On the face of it, this seems such a simple question, but it is really rather a tricky one to answer. The simple, if rather facetious, answer is ‘like caviar’. The problem is that it really tastes like nothing else so it is very hard to describe.

In our efforts to convey the taste, we in the trade often resort to using descriptions such as ‘buttery’, ‘creamy’, ‘with hints of the sea’, ‘whiffs of walnuts’ etc. All may well be true to varying degrees, but none fully convey the glorious flavour of good caviar.

It is almost easier to say what it should not taste of: fishy, overly salty, bitterness, blandness, ammonia, mud, soap, fizz. I have come across these undesirable flavours in caviar and they should be avoided, particularly the last as it will make you ill.

Good caviar should fill the mouth with flavour, some hitting the front of the mouth, some at the back, and it should linger. You know when you have had really good caviar when it lingers in your mind long after eating it.

Yes, very much so. There is an incredible variety of caviar on the market, which can be a bit confusing. There are the traditional species of Beluga, Oscietra and Sevruga. Additionally there are five other species that are more readily available in Europe, other species specific to China and varieties of hybrid fish.

However, species is far from the only consideration. The original source of the stock can have an impact. For example, Oscietra from Black Sea stock will tend to produce much darker caviar than that from Caspian Sea stock, which is considered to be better.

Further variation can occur in how the fish are farmed: the water quality, temperature, feed, harvest method and method of processing can all affect the final taste.

A good supplier should provide you with plenty of information, such as species, country of origin, harvest method, salt content etc to enable you to make an informed decision.

What is the ideal way to eat caviar?

The best way of really tasting caviar is to eat it entirely on its own. This can be interspersed with having it on blinis with varying amounts of chopped egg, chopped onion and sour cream. Then every mouthful is a different taste adventure, with the palate cleansed between.

In what more unusual ways can caviar be served?

Ideally the caviar should be the star of the show—you don’t want it to get lost in an elaborate dish. If you want to try something a little different it can go very well with new potatoes.

If you find blinis too stodgy, do try a neutral biscuit or French toast. I do like it the Russian way: lightly toasted chewy bread, generously spread with good butter with a large dollop of caviar on top. Just keep chewing and the flavours will keep coming. Simple, but perhaps not as elegant!

Do you cook caviar or eat it raw?

No—do not try to cook caviar as it does not take heat and will spoil. You will sometimes see pasteurised caviar for sale, although it is thankfully rare in the UK. The cooking process of pasteurisation hardens the individual eggs and it is not my favourite form of sturgeon caviar, even if it does extend the shelf life.

Don’t forget that caviar is not really ‘raw’ fish eggs—it is cured and preserved with salt.

Is there a traditional way of eating caviar?

Yes. Caviar is traditionally served on ice. This leads some people to believe that if it is not ice cold at all times, it will immediately go off. This is not the case. It is served on ice as it tastes best that way. Try it at room temperature and you will see what I mean.

The other quirk when serving caviar is that metal spoons should not be used. Caviar spoons are normally made of Mother-of-Pearl or horn. This is not due to tradition, but for the good reason that caviar reacts to metal and quickly becomes tainted. Gold does not have this effect. It is worth noting that metal caviar tins do not spoil caviar as they have a plastic veneer.

Why does caviar cost so much compared to fish?

The main reason is the lead in time before production can actually take place. The smaller sturgeon species will not produce caviar until they are seven to eight years old. The larger the fish, the longer it takes, with Beluga not producing caviar until approximately 18 years of age.

What drinks pair well with caviar?

Whatever your preference, the drink should clear the palate between mouthfuls of caviar. It should not leave a flavor in the mouth which will compete with the caviar’s flavour.

Caspian Caviar has over 17 years experience in supplying private clients, restaurants, food halls and hotels with caviar, truffles and fois gras. Their aim is to supply only the world’s finest foods on an exclusive basis. To take a look at their selection visit caspiancaviar.co.uk

Options for Dog Care When You Are Busy