One burger, two and a half sausages, two pints of lager and a sunny Bank Holiday Sunday afternoon have been revealed as the formula for the perfect BBQ – according to new research. 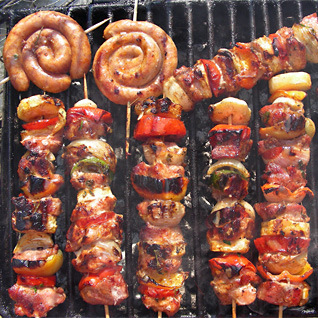 The study by online discount shopping site, NetVoucherCodes.co.uk asked respondents a series of questions about what made the perfect BBQ.

Almost all (97%) said that a sunny day was an essential feature with a similarly large percentage (94%) believing the temperature should be over 24°C.
When it comes to food, nearly three quarters (73%) insisted that at least one burger was a must, whereas two and a half sausages proved to be ample for the majority.
Chicken proved to be a popular but not ‘essential’ choice as did kebabs. The survey also revealed that a majority (58%) still thought it the duty of the man of the house to cook over the BBQ.

When it came to drink, one glass of Pimm’s and two bottles of chilled lager were deemed as essential. However, a crisp white wine was also a popular choice among respondents.
Participants were particularly specific when it came to choosing a date and time for a BBQ. By far the most popular start time, with 64% of the vote, was 3pm with many citing that the heat from the coals would keep guests warm well in to the night.

Whilst weekends were by far the most popular choice of preferred date, a Bank Holiday Sunday was the favourite single day. The study also found that the perfect number of friends at a BBQ was seven.
A spokesperson from NetVoucherCodes.co.uk commented: “Having a BBQ is an essential feature of the Great British Summer.

“If it’s bucketing down with rain we still somehow muster up some of the blitz-spirit and carry on regardless – even if it does mean someone standing over the BBQ with an umbrella.”
One male respondent said: “I’m always dubious about organising a BBQ in advance, especially on a Bank Holiday weekend as it’s sod’s law it will chuck it down with rain. I often find that the best BBQs are spontaneous.”

A female commented: “My husband always insists he cooks over the BBQ, despite the fact he’s probably the world’s worst chef.
“He, like many other BBQ chefs, has that rare ability to burn something on the outside but still leave it raw in the middle.”