The essential guide to soup dunking

Does half the pleasure of tucking into a bowl of soup lie in the mopping up? 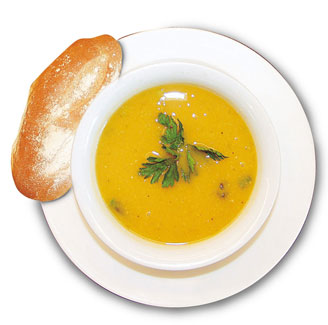 If so, what kind of bread is best for maximum dunkability: brown or white; baguette or bloomer; sliced or unsliced; fresh or toasted? Are some soups better than others for soaking up the liquid? And, crucially, is there ever a polite way to go about it?

As the soup season begins to hot up, Rod Hall from Devon-based organic soup producer Rod and Ben’s and artisan baker Shaun Ryder from Ryder’s Homemade Bakery have brought years of dunking experience to bear and have joined forces to draw up the Top ten tips for delectable dunking.

1.  Choose a soft, pillowy bread, such as ciabatta or a granary for maximum dunkability

2.  Breads with a cake-like texture, such as focaccia, can also withstand dunking

3.  A firm crust also provides a sturdy structure for dunking – for example, a baguette

4.  Smooth soups, such tomato or carrot and coriander, lend themselves to effortless dunking

5.  Don’t dunk for long – it only requires momentary submersion

6.  Choose a hunk over a slice, and fresh over toasted

7.  Forego the butter – it only melts and creates an oily film on the soup’s surface

8.  Dunk with confidence: it shows you love your food

9.  Take inspiration from the French, the king of dunking – they dunk croissants, bread, even camembert

10. Cutlery has no place in dunking (unless your dunk sinks, in which case you should sedately fish it out with your soup spoon)

Are you eating the right food for your body?

Thoughts on Marmite split the public