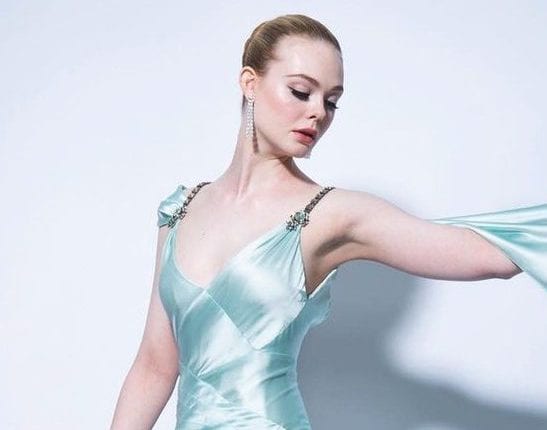 Though the 78th Golden Globe Awards which took place on February 28th was for the first time a virtual affair, in light of the Covid-19 pandemic, some celebrities still made the effort to dress up for the audiences. (Others, it has to be said, looked like they were still in their pyjamas).

Despite the loss of the traditional red carpet parade and photo-call, with nominees dialling in from their various homes or locations around the globe, there was still a requisite level of glamour as hosts Tina Fey and Amy Poehler introduced the Awards from separate locations. Presenters including Margot Robbie and Angela Bassett appeared on socially distanced red carpets to present the awards.

Emma Corrin’s outfit was a beaded Miu Miu gown with a striking collar which she teamed with pierrot makeup.

See also: Who Are The Top 10 Highest Grossing Movie Actresses of All Time?

In Her Awesome 80s, How Jane Fonda Earned Her Lifetime…

See also: Who Are the Top 10 Celebrity Animal Lovers?

Gillian Anderson, who won Best Supporting Actress for her part as Margaret Thatcher in The Crown, wore a Dior printed halterneck dress, and her dog had a matching collar, while Jane Fonda, who received a lifetime achievement award, wore a classic slimline white suit.

John Boyega appeared from his home resplendent in a white dinner-jacket, only to reveal that he was wearing tracksuit bottoms underneath.

It might not have been quite the same as appearing in front of the rows of paparazzi, but the bespoke couture frocks, statement gowns and smart suits did put in an appearance, with some celebrities making just as much effort as they would have for a live event, even if they were appearing in their living rooms.

British talent was to the fore as Emma Corrin won the Best Actress award for her role as Princess Diana in Netflix’s The Crown, while Rosamund Pike was awarded Best Actress in a Comedy Film for I Care A Lot. Actors Daniel Kaluuya and John Boyega also won Best Actor awards for their parts in Judas and the Black Messiah and Small Axe.

The 2021 virtual Golden Globes may have been a stay-at-home affair, but there was plenty of glamour on show as the stars were keen not to disappoint their fans.

Figures Show COVID Deaths Are Down By a Quarter