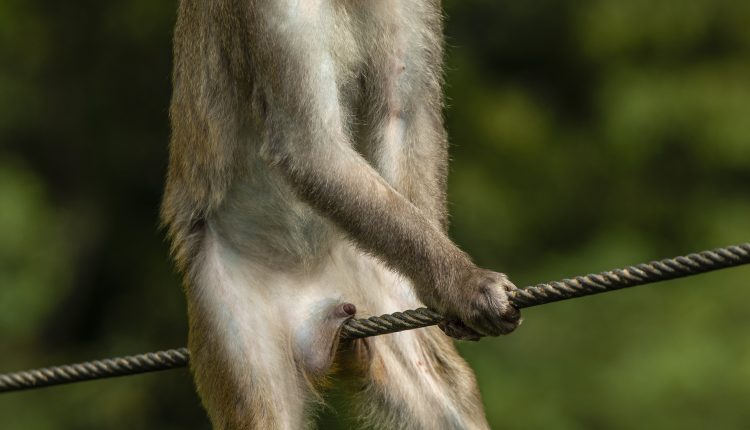 One of the most popular and funniest photography competitions around – The Comedy Wildlife Photography Awards 2021 – have announced Ken Jenson’s Ouch as the Overall Winner of this year’s competition.

For the first time in the competition’s history, the victors were announced live on television, on the BBC’s The One Show. There were in excess of 7,000 entries from across the world but it was Ken Brown’s image of a Golden Silk Monkey looking rather uncomfortable that took the crown as this year’s overall winner.

The photo was captured on a bridge that runs over the Xun river in Yunnan located in southwestern China. This is an area where monkey appear frequently, playing about on the bridge with their families and can certainly be very excitable when coming across a human being.

When coming to terms with the win, Ken Jenson said: “I was absolutely overwhelmed to learn that my entry had won, especially when there were quite a number of wonderful photos entered. The publicity that my image has received over the last few months has been incredible, it is such a great feeling to know that one’s image is making people smile globally as well as helping to support some fantastically worthwhile conservation causes.

“I would like to say a really big thank you to everyone who has enjoyed or voted for my image and would also like to thank the competition organisers without whom it would not have been possible. And I absolutely love the trophy!

Finally, I want to thank my wife Min, for the support and encouragement that she provides in my photography adventures.”

As a result, Ken wins himself a trophy made in Tanzania, a once in a lifetime safari trip within the world-renowned Masai Mara in Kenya with Alex Walker’s Serian, a photography bag from THINK TANK and a Goodie Bag filled with goodies.

Winners of the various other categories were also announced. Winners included John Speirs for his shot titled I Guess Summer’s Over which shows an image of a pigeon with its face covered by a leaf which landed there, which won the Spectrum Photo Creatures in the Air Award and Chee Kee Teo’s photo titled Time For School which shows a young otter being carried by the mouth of his mother, which won the Creatures Under the Sea Award.

This year’s winner of the Video Category Award was Rahul Lakhmani for his clip titled Hugging Best Friend After Lockdown which shows a seven- second clip of a Kingfisher flying in and colliding with another one, which some say may look like an over-zealous hug!

Commenting on this year’s competition, TV presenter, Kate Humble said: “I have been a judge on The Comedy Wildlife Photography Awards since it started and I l love it! It never fails to cheer me up. But the photographs can’t just be funny, they have got to be of really excellent quality and this year the competition entrants have really surpassed themselves….and as for the winner, you will see that it is a photograph that speaks a thousand words. Well, one word actually – Ouch!”

The Comedy Wildlife Photography Awards was co-founded in 2015 by professional photographers Paul Joynson-Hicks MBE and Tom Sullam who wanted to create a competition that focused on the lighter side of wildlife photography and help promote wildlife conservation through humour. This year, the competition is supporting Save Wild Orangutans by donating 10% of its total net revenue to the charity. The initiative safeguards wild orangutans in and around Gunung Palung National Park, Borneo.

To view all the winners of this year’s competition, click here.

Who Are the Top 10 Celebrity Animal Lovers?