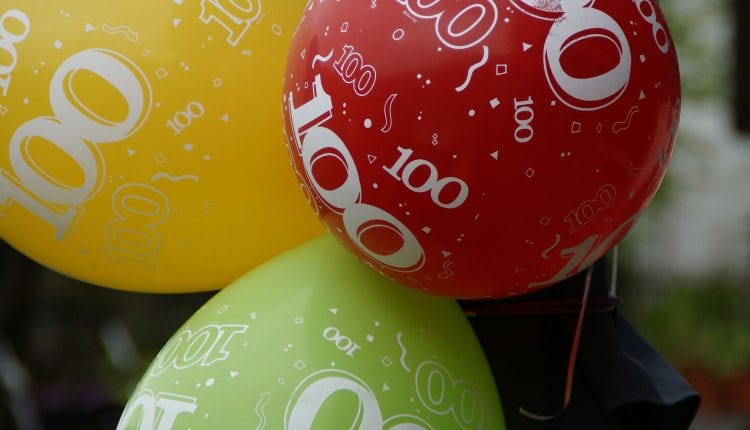 Whether it’s lucky genes or living a healthy life, living to 100 is becoming more common – but which celebrities lived to 100, and to what did they attribute their longevity?

See also: As Prince Charles Speaks Out On Food Production, 10 Facts You Didn’t Know About the Heir to the Throne

Dame Vera Lynn, singer famous for entertaining the troops and workers during the Second World War, died recently at the age of 103. In 2009, at the age of 92, the ‘Forces’ Sweetheart’ became the oldest living artist to top the UK Albums Chart with the compilation album We’ll Meet Again: The Very Best of Vera Lynn, and a few weeks ago she became the oldest artist to get a Top 40 album in the UK when her Greatest Hits collection re-entered the charts at number 30.

She spoke on the 75th anniversary of VE Day and at the height of the coronavirus pandemic, saying that simple acts of bravery and sacrifice still define our nation.

Probably the most famous of the British celebrities who lived to 100, Dame Very Lynn attributed her long life to staying interested, saying: “”Keep interested, read books, watch television and try to keep in touch with life and what people are doing, seeing and enjoying.”

In 2007 he said: “Age is in the mind. I’ve survived a helicopter crash and back surgery. I have a pacemaker. I had a stroke that almost made me commit suicide. But I tell myself, I have to continue growing and functioning. That’s the only antidote for age.”

One of the few great Hollywood celebrities who lived to 100, Kirk Douglas appeared at the 2018 Golden Globes at the age of 101 with his daughter-in-law Catherine Zeta-Jones, a rare public appearance in the final decade of his life.

Bob Hope, born in London but raised in America, lived to the age of 100 and attributed his longevity to golf and exercise. At the age of 78 he claimed that he walked two miles every night, a habit he picked up from his grandfather who walked two miles to the local pub every day to get a drink, and lived to almost 100.

Bob Hope, who died in 2003, made his name as a vaudeville performer, had a career spanning nearly 80 years, appearing in more than 70 short and feature films, with 54 feature films as star, including the series of seven Road musical comedy movies with Bing Crosby as partner.

He’s not exactly a household name among celebrities who lived to 100, but as the chemist who was the first to synthesize and ingest the hallucinogenic drug LSD, Albert Hofmann earned a place in science and popular culture.

Born in 1906, Albert Hofmann lived until 2008, but never suggested that the use of LSD had contributed to his longevity – he thought it was because he ate two eggs every morning. “In an egg, there is everything a being needs to develop—vitamins, minerals, and hormones,” he claimed.

Of these ten celebrities who lived to 100, Albert Hofmann is the only one to shared first place with Tim Berners-Lee in a list of the 100 greatest living geniuses, published in 2007.

Comedian George Burns was born in 1896 and died at the age of 100 in 1996. He attributed his great age to his comedy career, which he said kept him feeling young. At a standup special in Las Vegas shortly before his death he said: “It’s nice to be here. When you’re 100 years old, it’s nice to be anywhere.”

George Burns estimated that he smoked 300,000 cigars in his life, starting at the age of 14. In his later years he cut down to four a day. If you’re looking to compile a list of celebrities who lived to 100 through a healthy lifestyle, look elsewhere.

“If you ask what is the single most important key to longevity,” he wrote, “I would have to say it is avoiding worry, stress and tension. And if you didn’t ask me, I’d still have to say it.”

Again not exactly a household name, but if you’re into kung-fu movies and other classics of Hong Kong cinema genres, you’ll know the name of this prodigious producer. Born in 1907, he produced over 300 films from The One-Armed Swordsman to Blade Runner. He died in 2014 at the age of 106.

According to The People’s Daily, the official newspaper of the government of China, one of the secrets to Sir Run Run Shaw’s long life was his daily habit of “rotat(ing) his feet 64 times before (he) went to bed.” It’s more likely the secret method this celebrity lived to 100 was his devotion to the meditational practice of qigong.

Elizabeth Angela Marguerite Bowes-Lyon was the wife of King George VI, and the mother of Queen Elizabeth II and Princess Margaret. Her 100th birthday was celebrated by a parade that celebrated the highlights of her life including contributions from Sir Norman Wisdom and Sir John Mills. Of all the celebrities who lived to 100, the Queen Mother is the only one who could claim her image appeared on a special commemorative £20 note issued by the Royal Bank of Scotland.

The Queen Mother was quoted as saying: “Wouldn’t it be terrible if you’d spent all your life doing everything you were supposed to do, didn’t drink, didn’t smoke, didn’t eat things, took lots of exercise, and suddenly, one day, you were run over by a big red bus and, as the wheels were crunching into you, you’d say, ‘Oh my God, I could have got so drunk last night. That’s the way you should live your life, as if tomorrow you’ll be run over by a big red bus.”

Javier Felipe Ricardo Pérez de Cuéllar y de la Guerra KCMG, to give him his full honorific, was a Peruvian diplomat and politician who probably wouldn’t have come to power had his rivals not stepped aside over corruption charges or allegations of fascist sympathies.

Described at the time as “everyone’s last choice,” he served with distinction as fifth Secretary-General of the United Nations from 1982 to 1991, and later as Peru’s Ambassador to France.

At the age of 100 years, 45 days at the time of his death in March 2020, Pérez de Cuéllar was both the oldest living former Peruvian prime minister and Secretary General of the United Nations.

It’s not known to what he attributed his presence on the list of celebrities who lived to 100, but Javier Pérez de Cuéllar was known to be a collector of CDs and stamps, so maybe there’s something in that.

At the age of 87, in 1988, Gloria Stuart became the oldest woman to be nominated for an Academy Award for Best Actress in a Supporting Role, for her appearance as the older Rose in Titanic. She said: “When I graduated from Santa Monica High in 1927, I was voted the girl most likely to succeed. I didn’t realize it would take so long.”

After early successes in The Old Dark House (1932), The Invisible Man (1933), Shirley Temple musicals Poor Little Rich Girl (1936) and Rebecca of Sunnybrook Farm (1938) and starring as Queen Anne in the musical comedy The Three Musketeers (1939), Gloria Stuart left showbusiness for some decades, working instead as an artist.

She returned to the screen in the late 1970s and worked up to 2004. She died in 2010, aged 100. Asked how she explained her presence among the celebrities who lived to 100, she attributed her longevity to love. “If you’re full of love, admiration, appreciation of the beautiful things there are in this life, you have it made, really. And I have it made”, she once said.

Olivia Mary de Havilland DBE, born July 1, 1916, was a British-American actress whose major works spanned from 1935 to 1988. She appeared in 49 feature films, and was one of the leading actors of her time. One of the last surviving stars from the Golden Age of Hollywood Cinema, her younger sister was actress Joan Fontaine.

Starring with Errol Flynn in adventure films such as Captain Blood (1935) and The Adventures of Robin Hood (1938), as well as her role as Melanie Hamilton in Gone with the Wind (1939), she received two Best Actress Oscars, one in 1946 for To Each His Own and the second in 1949 for The Heiress, as well as being awarded the American National Medal of the Arts, the French Légion d’Honneur, and being named a Dame Commander of the Order of the British Empire.

Until her death in July 2020 Olivia de Havilland lived in Paris where she climbed stairs regularly in her luxurious residence, and attributed her pre-eminent place among the celebrities who lived to 100 to “love, laughter, and learning.”

If you enjoyed our feature on Celebrities who lived to 100 and want to know the secrets, then you need to read LIVE to 100 Magazine with Dr. Hilary Jones.

Nifty at 50 – Which Other Celebs Share Amanda Holden’s Birth Year?