Learn how to prepare the Swiss national dish and, while you’re here, delve into the nation’s footballing history. 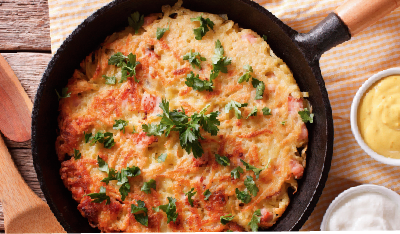 A past host country of the FIFA World Cup, Switzerland has appeared in the international competition 10 times. Their best result? Reaching the quarterfinals in 1934, 1938 and 1954. Fun fact: in the 2006 World Cup, Switzerland set a record they will not want to be reminded of—they went out in the last 16 despite never having conceded a goal in the whole tournament.

In terms of food, fondue, raclette and rösti—a dish consisting of potatoes in the style of a fritter—are omnipresent in Switzerland’s culinary scene. The cuisine uses a lot of dairy products such as gruyere or emmenthal, and the country is also famous for its chocolate offerings.

1. Grate the potatoes onto a clean tea towel, fold into a ball and remove as much moisture as possible. Season and divide into 4 portions.

2. Heat olive oil in a large frying pan. Using a metal chef’s ring, carefully fill one portion of grated potato. Push down with a spoon to make a compact cake. Remove the ring and repeat with the remaining portions.

3. Fry the rösti for 4 minutes on both sides—or until golden brown—adding more oil if required. Season to taste. Remove from the pan and drain on kitchen paper before serving.