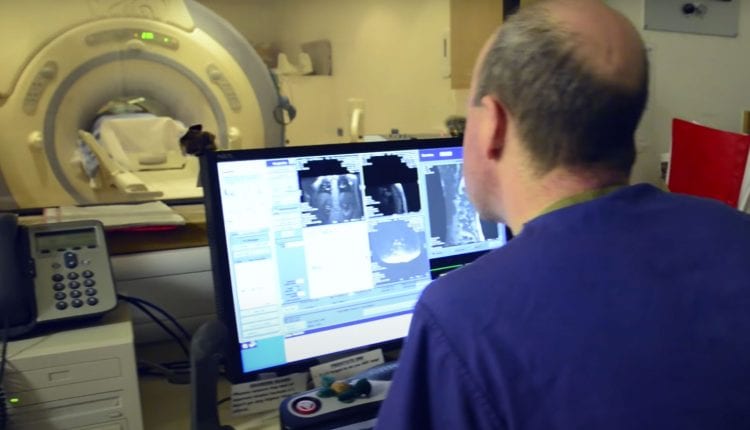 Researchers have suggested that Covid-19 could cause lung damage detectable more than three months after the initial infection, even in patients who have not been seriously ill or admitted to hospital. Though the study of ten patients by Oxford University is small, it suggests that so-called ‘long COVID’ could be caused by microscopic lung damage not visible to conventional scans.

The study used a novel scanning technique using xenon, an inert gas, to to fill the lungs during MRI scanning. The images resulting show a level of damage finer than conventional scans can detect.

The work, led by Professor Fergus Gleeson, studied 10 patients aged between 19 and 69, eight of whom suffered from persistent shortness of breath and tiredness three months after being ill with coronavirus, though none of them had been required ventilation or been admitted to Intensive Care. Conventional scans had found no problems with their lungs, but the xenon technique showed signs of lung damage by highlighting areas where oxygen was not flowing easily into the blood.

See also: Coronavirus Vaccine Approved for Use in UK

Professor Gleeson’s team is now planning a trial with up to 100 patients to see if the same results are shown even where there has been no hospital admission or signs of such serious symptoms. Part of the aim of the study is to determine whether the lung damage is temporary or permanent.

He said: “I was expecting some form of lung damage, but not to the degree that we have seen.”

Though it’s known that the risk of severe illness and death from COVID-19 increases with age, and markedly for the over 60s, Professor Gleeson wants to find out whether this form of lung damage occurs across all age groups, and in people who have not had symptoms serious enough to require hospital admission. “It would move the goalposts,” says Professor Gleeson.

The scanning technique was developed by a research group at the University of Sheffield led by Prof James Wild who said: “In other fibrotic lung diseases we have shown the methods to be very sensitive to this impairment and we hope the work can help understand Covid-19 lung disease.”

Government figures now show that there have been more than 1.6 million confirmed cases of coronavirus in the UK and nearly 60,000 deaths. However, these figures include only people who have died within 28 days of testing positive for coronavirus, and other figures suggest that the number of deaths is higher.

Reported cases of coronavirus peaked in April 2020 and started rising again in July. Rates of growth increased sharply in September and October, before falling again towards the end of November as the effects of the second national lockdown kicked in. However, on Monday 30th November the government announced a further 12,330 confirmed cases, and it’s now thought that the infection rate in Spring may have been higher than reported, but at the time there was not the testing capacity to report it accurately.

The REACT-1 study by Imperial College London based on tests of more than 100,000 people between 13-24 November suggests that coronavirus infections in England have fallen by about a third during the second lockdown, but despite improvements in the worst-hit areas, overall levels have remained relatively high.

The latest figures from the Office for National Statistics (ONS), suggest that about one in 185 (16,400 people) in Wales had the virus in the week ending 21 November, while in Northern Ireland rates appear to be decreasing to around one in 145 people (about 12,700 people), and in Scotland, the figure was one in 115 (about 45,700 people).

But the average number of daily deaths began to rise again in September, with a further 205 deaths, 189 in England, 10 in Northern Ireland, three in Scotland and three in Wales.

These figures reflect amended data which includes deaths in the coronavirus total only if they occurred within 28 days of a positive test, rather than all deaths after a positive test being were included. If all deaths where coronavirus was mentioned on the death certificate, even if the person had not been tested for the virus are included, the most recent figures suggest there had been more than 66,000 deaths by 13th November.

Another measure counts all deaths over and above the national average at this time of year, and that figure reached more than 73,000 by 13th November.

Rates of hospital admissions have decreased, with the North West, North East and Yorkshire, and Midlands showing the highest number but the situation in all three now improving.

The ‘R’ number, the reproduction number or average number of people infected by another person with coronavirus, is now estimated at 0.9 to 1, representing a very small decrease in the rate infections. The estimate for England is 0.9 to 1, Scotland is 0.8 to 1, Wales is 0.8 to 1 and Northern Ireland is 0.9 to 1.1. But the government says that ‘Given the increasingly localised approach to managing the epidemic, particularly between nations, UK level estimates are less meaningful than previously.’

The government has said in the past that the R number is one of the most important factors in making policy decisions, and with the devolved governments it is currently debating new measures to impose tiers of lockdown on different areas in the UK.

Read here for more details of the Oxford University Xenon MRI research suggesting that Covid-19 could cause lung damage detectable more than three months after the initial infection, so-called ‘long COVID’ could be caused by microscopic lung damage not visible to conventional scans.

What Are The Pros and Cons of Self-Build Homes?