The Spanish diet, like that of its Mediterranean neighbours, is bursting with flavour and goodness. Paella, a Spanish staple, is no exception. 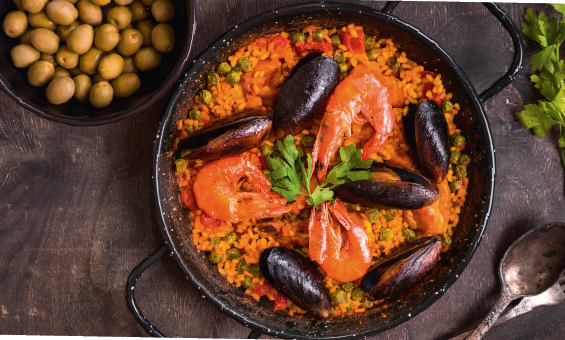 Known as La Furia Roja (The Red Fury), the Spanish national football team is among the world’s most famous in terms of performance. Despite having appeared in 15 FIFA World Cup Championships—the first of which was in 1934—the team have only won once, in 2010.

2. Heat 2 tbsp olive oil in a large frying pan over a medium heat. Stir in garlic, chilli flakes and rice. Cook, always stirring, for 3 minutes. Mix in saffron threads, bay leaf, chicken stock and lemon zest. Bring to the boil, cover and simmer for 20 minutes on a medium-low heat.

4. To serve, spread rice mixture onto a platter, top with meat and seafood mixture.