Amanda Holden is an avid user of Twitter, attracting more than 1.2m followers, yet so many of those in the public eye abuse their notoriety with some of the things they post on social networking sites. Or do they? 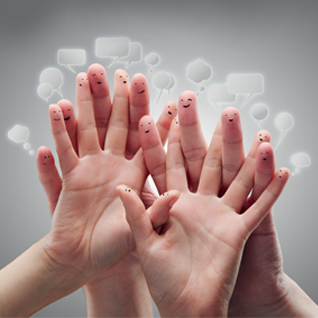 Facebook allows us to share with friends, reconnect with those from our past and keep in touch with loved ones abroad, while Twitter allows us to express ourselves – and follow those who interest us. In the form of the latter, celebrities are able to connect with their legions of fans and offer an insight into their day-to-day lives – but do they sometimes overstep the mark?

‘Twitter is one of the best things for people in the public eye to use,’ explains Amanda. ‘I totally get it as a concept. I use it as a right to reply and always tweet about charities and positive things. It’s an amazing tool.’
But for some in the public eye their tweets are landing them in hot water. We need look no further than footballers in the UK, considered widely to be role models to a younger audience. The most recent example being Chelsea and England player Ashley Cole who tweeted derogatory remarks towards the Football Association with regards to his involvement in the John Terry racism court case. It was retweeted more than 19,000 times before Cole deleted it and was forced to make an apology.

Yet, despite the growing trend for celebrities finding themselves in trouble through social media, such as Twitter continue to attract more high profile users – even world leaders, who deem it a necessary tool to their arsenal.

Prime User
The Prime Minister, David Cameron recently joined Twitter – despite once commenting that people’s downfalls can stem from posting too many tweets. To mark his party conference in Birmingham the Tory leader set up his account and within 12 hours @David_Cameron had gained almost 75,000 followers. Hypocrite or smart?

Over the pond in the USA, social media is regarded as essential in the battle for the White House. A recent Google poll of 2,500 American internet users revealed that 64 per cent thought Barack Obama did a better job than his main rival, Mitt Romney, when using social networking during the presidential campaign. A spokesperson for social media agency, One2One Digital said,‘The results of this survey quite clearly indicate that Obama is the leading candidate in terms of generating momentum and gaining support via social media.’

The likes of Twitter, Facebook and Google+ have been used regularly by both American campaigns to get their viewpoints across to the wider public, encouraging more people to vote. It’s little wonder then that during the first presidential debate this year Twitter went into hyper-activity when the debate generated 10.3m tweets in an astonishing 90 minutes, unsurprisingly making it the most tweeted event in U.S. political history.

In this respect, the power of social networking is evidently clear. But some people abuse that power and their freedom of speech by taking things too far – and it’s not just celebrities.

Grossly Offensive
Posting highly inappropriate comments online which leads to offence taken by the readers is punishable under section 127 of the Communications Act 2003.The most recent example is 19-year-old Matthew Woods who was sentenced to 12 weeks imprisonment for publishing “grossly offensive” comments – which he found on Sikipedia – onto his Facebook page with regards to missing five-year-old, April Jones. Charged with sending a “message or other matter that is grossly offensive or of an indecent, obscene or menacing character” Woods pleaded guilty to the offence in Chorley magistrates’ court. ‘Websites like Sikipedia shouldn’t be allowed to remain live in the first place,’ comments Amanda.

This, among other cases, led to the director of public prosecutions, Keir Starmer, to consult with lawyers, journalists and police on the subject of pushing the likes of Facebook and Twitter to clamp down on the irresponsible by taking more responsibility and upping the monitoring of abusive content uploaded onto their sites.

‘The time has come for an informed debate about the boundaries of free speech in an age of social media,’ Starmer explained. It is believed that high on the agenda is to enforce a heavier policing system on social networking sites so that offensive remarks can be deleted quicker, which will result in less arrests being made.

‘On Twitter there’s too much anonymity so cowardly people feel like they can hide when saying something offensive,’ explains Amanda. ‘There’s someone on Facebook who has set up an account in my name and impersonates me.Yet it looks so authentic because I’m on Twitter. Despite constantly getting it blocked it continues to resurface.There must be stricter regulations because it’s a free-for-all.’

As Twitter champions free speech, their policy does not provide them with a capacity to interfere with controversy or heated debates, yet instead empowering the users by allowing them to block those who offend them. One change to its rules the social networking site has considered recently, however, is making “direct, repeated attacks on an individual a possible violation.”

Facebook, in contrast, is heavier on its policing of its one billion users, acting quickly to take down inappropriate pages, such as the one set up by a man from Liverpool – “Dale Cregan is a hero” – referring to the suspect charged with the murders of two police officers in Manchester and a father and son. Unsurprisingly, the man from Liverpool responsible for the creation of said Facebook page was subsequently arrested. A specialist team has also been set up in Dublin where every user of the site can report abuse and have accounts blocked if the accused are guilty of uploading grossly offensive content.

‘To ensure that CPS (Crown Prosecution Service) decision-making in these difficult cases is clear and consistent, I intend to issue guidelines on social media cases for prosecutors,’ said Starmer.

It seems, from Starmer’s words, that action is being taken and will inevitably be enforced in only a matter of time. In the meantime, it’s down to those in the public eye who have such a large following to set a moral standard by keeping respect and discretion in all their tweets and uploads. Who knows, perhaps that way more people will “like” what they see.

Babies in the Office – Equal pay, a place in the boardroom and a baby at work, possible or not?