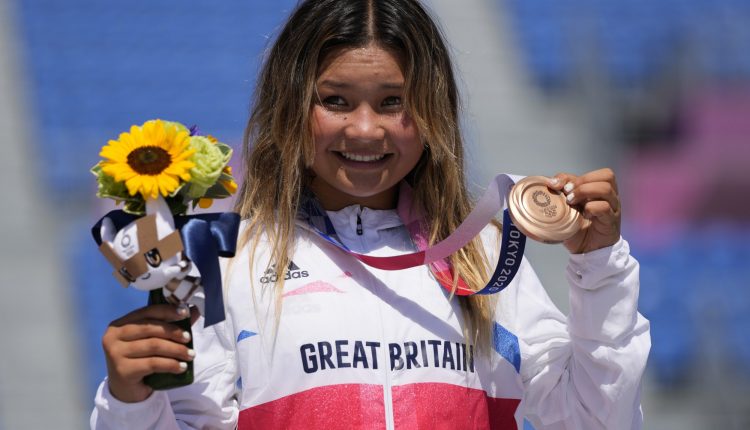 One of the most exciting stories to come out of the Tokyo Olympics is that of Sky Brown, the youngest-ever British medal winner. But who is the 13-year-old who has skateboarded her way into the record books?

Sky Brown, though she spends half of her year in America and is part Japanese, has a British father, and at the age of 13 competes for Great Britain as the youngest professional skateboarder in the world. At the age of twelve, she was selected to represent Great Britain at the 2020 Summer Olympics, held this year due to COVID delays. One of the most exciting stories to come out of the Olympics is Sky’s skateboarding bronze medal – she was beaten to silver and gold by Japanese contestants aged 19 and 12.

Sky Brown was born in Miyazaki, Japan. Her mother, Mieko, is Japanese and her father, Stuart, is British. In Japanese, her name is pronounced Sukai.

Staurt lived in the United States for several years before moving to Miyazaki, Japan. Sky lives in Miyazaki, but spends around half the year in the US. Her family are skateboarders, and her preschool had a skate park, and she now has a skating ramp in her back garden, as there are no skateparks in her home area of Takanabe. Sky is also a surfer, and gets up at 5 am most mornings to surf.

Teaching herself skateboarding tricks from YouTube, Sky sometimes practices with Shaun White, who won Olympic snowboarding medals. She is sponsored by Nike, making her the youngest Nike sponsored athlete in the world, and has featured in a Nike ad campaign alongside tennis player Serena Williams and athlete Simone Biles.

In 2016, at the age of 8, Sky Brown took part in the Vans US Open, making her the youngest person ever to compete at the event, and she became a professional athlete at the age of 10, making her the youngest professional skateboarder in the world. In 2017, she came second in the Asian Continental Finals, and in 2018 she finished in the top 10 of the 2018 Vans Park Series.

Proving that there’s more to her talents than just skateboarding, in 2018, she won the US TV show Dancing with the Stars: Juniors.

See also: Which of Your TV Favourites Has a 2021 Emmy Nomination?

Sky Brown was one of five Britons attempting to qualify for the skateboarding events at the 2020 Summer Olympics, the first time the sport would be included in the games. But in May 2020, while training in California, she suffered a “horrific” fall from a halfpipe ramp which left her with several skull fractures and a broken left wrist and hand. She was flown to a hospital and was reported as being unresponsive on arrival. Her father said afterwards that she was “lucky to be alive”, while Sky herself said it was her worst fall yet. But she remained determined to push boundaries and compete at the Tokyo Olympics, saying that she was also considering trying to compete in surfing.

In June 2021, Sky Brown was selected to represent Great Britain in skateboarding at the 2020 Summer Olympics, becoming the youngest British Summer Olympian ever, at the age of 13, beating Margery Hinton who was 13 years and 43 days when she competed in the 200 metre breaststroke event at the 1928 Summer Olympics.

The teenage skateboarder had qualified in second place for the final at the Ariake Urban Park, with a best score of 57.40.

After falling in her first two runs of the final, she nailed her last attempt with a score of 56.47 to finish behind Japanese pair Sakura Yosozumi, 19, and Kokona Hiraki aged 12.

Sky was not the youngest competitor at the Games, as Syrian table tennis player Hend Zaza and Japanese skateboarder Kokona Hiraki were younger. But her bronze medal in the skateboarding event at the 2020 Summer Olympics made her Great Britain’s youngest ever medal winner, at the age of 13 years and 28 days.

Sky Brown has over a million followers on Instagram and over 29 million views on YouTube, figures that are bound to shoot up after her Olympics success. Apart from her Nike sponsorship, she has a deal with Mattel for a Barbie doll, and one with Claire’s Accessories, and has been doing TV adverts for Visa and Samsung. And guess what – she has a younger brother, Ocean, age 9, who is also a skateboarder and social media star.