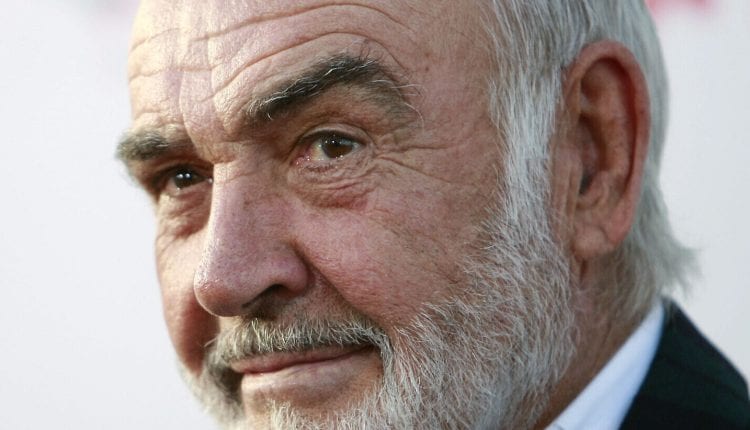 Sir Sean Connery, the actor best known for his role as the original movie James Bond, has died at the age of 90.

The Scottish actor appeared in seven of the James Bon blockbusters starting with Dr No in 1962 and ending Never Say Never Again in 1983, and was closely associated with the role throughout his career despite his other achievements including an Academy Award for his part in The Untouchables in 1988.

Sir Sean Connery’s family said that he died peacefully in his sleep at his home in Nassau in the Bahamas, having been unwell for some time. The island was the setting for the James Bond movie Thunderball. He leaves his wife Micheline and sons Jason and Stephane.

Apart from the James Bond role, his other movies included The Hunt for Red October, Highlander, Indiana Jones and the Last Crusade and The Rock.

Tributes to the actor were led by current James Bond, Daniel Craig, who said that Sir Sean was “one of the true greats of cinema”.

“Sir Sean Connery will be remembered as Bond and so much more,” he said.

“He defined an era and a style. The wit and charm he portrayed on screen could be measured in megawatts; he helped create the modern blockbuster.

“He will continue to influence actors and film-makers alike for years to come. My thoughts are with his family and loved ones.”

In reference to Sir Sean’s famous love of golf, he added: “Wherever he is, I hope there is a golf course.”

Tribute was also paid by Dame Shirley Bassey, who sang the themes to three Bond films including Goldfinger, and said “I’m incredibly saddened to hear of Sean’s passing.

“My thoughts are with his family. He was a wonderful person, a true gentleman and we will be forever connected by Bond.”

Thomas Sean Connery was born in Fountainbridge in Edinburgh, worked as a milkman, took up boy-building and had early ambitions to be a footballer. He made his first major film appearance in 1957 British gangster film No Road Back, and despite being told that his strong Scottish accent would hold him back, first played James Bond in Dr No in 1962. He went on to appear in From Russia with Love (1963), Goldfinger (1964), Thunderball (1965), You Only Live Twice (1967), and Diamonds are Forever (1971), then returned to the role in the semi-official Never Say Never Again in 1983.

He often topped polls for the public’s favourite Bond actor, his combination of sardonic wit and toughness appealing to men and women alike, though critics found the character increasingly dated.

He prove his acting credentials though in roles such as tough police sergeant Jim Malone in The Untouchables, for which he won an Oscar for Best Actor in a Supporting Role in 1987.

He was knighted by the Queen at Holyrood Palace in 2000, and effectively retired from acting in 2003 after the failure of the movie The League of Extraordinary Gentlemen. He turned down offers of other roles including Gandalf in The Lord of the Rings, and confirmed his retirement from acting when he received the American Film Institute’s Lifetime Achievement Award in 2006.

Bond producers Michael G Wilson and Barbara Broccoli said they were “devastated by the news” of his death.

They said: “He was and shall always be remembered as the original James Bond whose indelible entrance into cinema history began when he announced those unforgettable words ‘the name’s Bond… James Bond’.

“He revolutionised the world with his gritty and witty portrayal of the sexy and charismatic secret agent. He is undoubtedly largely responsible for the success of the film series and we shall be forever grateful to him.”

“He will always hold a special place in my heart as Indy’s dad. With an air of intelligent authority and sly sense of comedic mischief, only someone like Sean Connery could render Indiana Jones immediately into boyish regret or relief through a stern fatherly chiding or rejoiceful hug.

“I’m thankful for having had the good fortune to have known and worked with him. My thoughts are with his family.”

A long-time supporter of Scottish independence, Sean Connery fought back against accusations of being a tax exile, and said in the run-up to the 2014 referendum that he might return from the Bahamas to live in Scotland if it voted to separate from the UK. His patriotism extended to having a tattoo reading ‘Scotland Forever’ on his arm.

Alex Salmond, the former first minister of Scotland, was a close friend of Sir Sean, and described him as “the world’s greatest Scot, the last of the real Hollywood stars, the definitive Bond”.

He added: “Sean Connery was all of these things but much more. He was also a staunch patriot, a deep thinker and outstanding human being. ‘Scotland Forever’ wasn’t just tattooed on his forearm but was imprinted on his soul.”

How a Resin Bound Driveway Combines Beauty and Practicality