With a triumphant career both on screen as a presenter and resident chef on BBC2’s Something for the Weekend, and off screen as the owner of two successful restaurants, it’s hard to believe that Simon Rimmer never had any intention of becoming a chef. Lauren King finds out how it all started, what it’s like to be labeled a celebrity chef and what his favourite British dish is 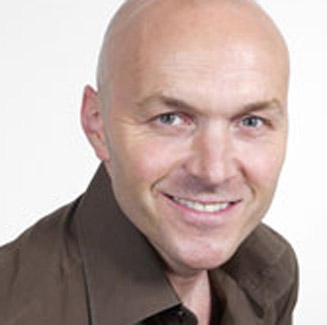 When Simon first applied for a casual student job, he only ever expected it to last for a couple of years to get him through his studies. So you can imagine how he feels now, looking back on where his career has taken him so far. From working as front-of-house in restaurants and bars as a student, to opening his own restaurants and becoming the face of BBC2’s popular Sunday morning show, Something for the Weekend, alongside Tim Lovejoy and Louise Redknapp, Simon Rimmer is one of the UK’s most recognised television chefs. Although, it hasn’t all been plane sailing, as Simon admits it was sometimes a struggle to get the balance right, especially when it came to the opening of Earle in Hale alongside having to make several media appearances each week. With a lot of hard work, and a couple of veggie cookbooks for support, Simon has turned his student job into a successful career.

You didn’t start out with the intention of having a career in the food and hospitality industry, how did it all come about?
When I was a student I used to work in restaurants and bars as front-of-house and then decided I liked the idea of having my own place. I managed to get some money to buy Greens with a friend of mine and we’ve never looked back. I never had the intention of being in the kitchen but we couldn’t afford anyone else, so that’s where I ended up…with a couple of veggie cookbooks.

You are not a vegetarian, so why did you decide to open Greens, a vegetarian restaurant?
It already was a veggie café so that was a good start.  We had no money and it was the cheapest restaurant we could find. We did it more for the location, as West Didsbury was fast becoming the place to be.

If you did become a vegetarian, what meat dish would you miss the most?
Definitely bacon sandwiches, everyone says the same thing.

In 2006 you opened Earle in Hale, how is that going?
Great. We had a bit of a slow start at first, we didn’t quite get it right initially, but four and a half years down the line it’s working really well and I’m really enjoying what we’re doing there.

You have a busy schedule and lots of television appearances, how do you manage to fit that in around the running of your two restaurants?
I equate myself to being an old music hall act. I’m a plate spinner. Most of the time the plates stay on the sticks, but occasionally they come crashing down!

You have been one of the presenters of Something for the Weekend for some time now, who has been the most memorable guest you’ve had on the show?
My favourite guests were Vic Reeves and Bob Mortimer. They are talented and hilarious, in fact side-splittingly funny.

Who is the better cook, Louise Redknapp or Tim Lovejoy?
Tim is much better by a million miles! Louise doesn’t cook at all.

Do you have plans for more cookbooks?
Yes, we’re working on them at the moment.

You are the face of Eatthechef.com, what is the website all about?
We are a Youtube for food; a rapidly growing food community where people upload and share their videos of cooking.

You do a lot of cooking at work, who tends to do the cooking at home?
We share it. I still love cooking at home for Ali and the kids. It’s completely different from cooking for 200 people at the restaurant.

During the summer months, what dish are we most likely to find you cooking?
I cook lots of fish and I also cook lots of steak. I like salsas and light salads and paella style rice to go with a meat dish.

Who or what inspires your recipe creations?
Various things. Anything from something that’s seasonal, a location, an article in a magazine. Constantly cooking and working with food is my inspiration.

What produce do you get excited about using in a dish the most?
The seasons still excite me. In the summer time, delicious British strawberries are perfect, and in the winter months there’s nothing nicer than butternut squash. Winter lamb I particularly enjoy as well, lots of big rich flavours.

As a chef, you are around food all the time, how healthy is your own diet?
Not bad. However, it does tend to get bad when I’m away filming. When you spend your life in hotels or in a car you survive on motorway service station meals, but at home I eat pretty well.

When you are not cooking, what do you like to do in your spare time?
I run and play football with my son Hamish. I watch football and I read.

You recently travelled to Antigua in the Caribbean to join the Food Festival over there, how was that?
It was a great trip. Rex resorts invited me to do some cooking demos. Caribbean food isn’t all about jerk spices and fried foods. They have a large selection of beautiful seafood, a lovely mixture of flavours and delicious exotic fruits.

While you were at the Food Festival you taught holidaymakers to cook local cuisine, how important is it for people to be able to cook?
It’s really important. It’s one of life’s greatest skills to be able to look after yourselves. I find it very frustrating that we’ve had three generations of adults who don’t know how to cook. I’m so pleased that it’s now back on the school curriculum. It means that we’ll have a better diet and tackle the modern day problems of rising obesity in young people.

Have your two children inherited your passion for cooking?
Yes, they like to cook. We had a new kitchen installed 18 months ago and since then they cook more and more.

What’s your favourite dish to create?
I have many. I love to cook Thai food. I adore big, rich, hearty, slow cooked casseroles and stews, particularly using lamb. I always love cooking fish.

What would be your dream three-course meal?
For starter a seafood platter. As my main I would have an Indian lamb saag balti, and I’m not really a sweet person so I’d have a selection of good local north-west cheeses with biscuits and chutney for dessert.

Looking back at your career, has it planned out as you thought it would?
No, as I didn’t intend to be a chef! I’m still waiting for my career plan. I think I’m very lucky. My life continues to be exciting and challenging. I’d like more of the same but with more money and less work!

What have you got planned for the future?
More of the same. Maybe have a little more free time. I’d like to travel more. There are lots of places like South America and Japan who have amazing cuisines and I’d like to try them out.

To view Simon’s blog and more of his recipes, visit http://www.eatthechef.com.