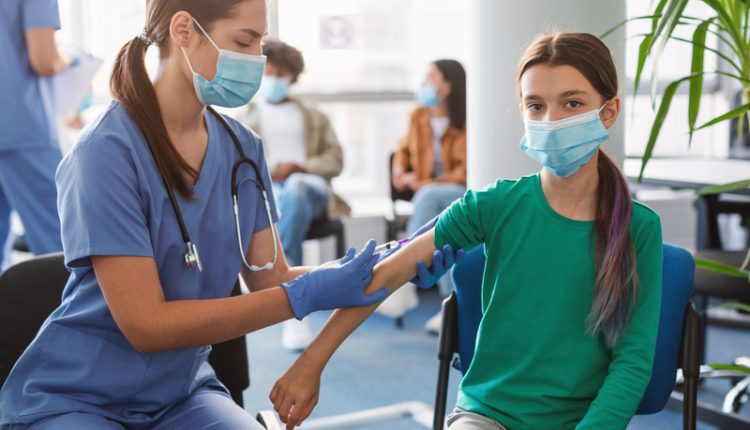 As schools re-open for the start of the new academic year, concerns have grown that they could turn into hubs for the virus and cause another lockdown in the near future. Both Pfizer and Moderna vaccines have been approved for healthy children between 12 and 15, but many parents remain concerned with risks of side effects.

British vaccines minister Nadhim Zahawi stated on Sunday that a decision on whether those aged 12 to 15 should get the vaccine had not yet been made. However, ministers have indicated they are keen to authorise a wider rollout. So, should children be given the vaccine – what are the arguments for and against?

See also: Are You Paying a ‘Pink Tax’ On Girls’ School Uniform?

Are the vaccines safe for children?

According to numerous health experts, the vaccines has proven to be safe for children.

Professor of Immunology and Infectious Disease at the University of Edinburgh, Eleanor Riley, said trials of the vaccines on children have proven to be a success.

“Data from large scale vaccination of 12-18 years olds in the USA suggests that the mRNA vaccines have an excellent safety profile in this age group.”

Back in March, Pfizer announced that their COVID vaccine trial showed 100% effectiveness when tested on those aged 12 and 15. In addition, during its first week of the rollout, across the US, 600,000 children were vaccinated.

Scotland’s national clinical director, Prof Jason Leitch said that if the UK had the jabs available to vaccinate children then they would be ready and prepared to execute the vaccinations.

“We have vaccine centres ready, we have drop-in clinics ready. So if the starting pistol is fired, we have no doubt that we can do this group,” he stated.

Currently, vaccines have not yet been approved for children below the age of 12 but trials from Pfizer and Moderna are underway.

What are the benefits of vaccinating children?

One of the main benefits from vaccinating children apart from protecting themselves is that it would also protect the wider community including the most vulnerable. It also aids to increase immunity to COVID within the British population, weakening the general threat the virus would pose.

What are the disadvantages of vaccinating children?

Despite the vaccine being declared as safe, like many other vaccines, there are still a small number of people who have suffered from side effects.

One of the very rare side effects reported from the vaccines is people developing myocarditis, which means inflammation of the heart muscle, and pericarditis, which means inflammation of the lining surrounding the heart. These conditions can lead to short periods of hospitalisation but are typically followed by quick recoveries. But there is little data about possible long-term effects.

At this stage the Joint Committee on Vaccination and Immunisation (JCVI) decided against recommending the vaccine to all 12-to-15-year olds, but a final decision will rest in the hands of politicians. The JCVI concluded that the medium and long-term effects of the vaccine are still uncertain and that more time needs to be given to provide a clearer picture on the situation, and that vaccinating young children that are also healthy will have minimal benefits. The question is whether vaccinating children would reduce the spread of the virus to adults – eliminating the need for school closures, for instance.

Should children make their own decisions?

Following on from the JCVI decision, there has been a debate on whether getting or not getting the vaccine should be down to the children themselves.

Nadhim Zahawi has said that parental consent will be required if it is decided that children aged 12-15 should be offered the vaccine; however other medical experts suggest that this should not be needed and that children can make the decision themselves.

Senior clinical lecturer at the University of Exeter Medical School, Dr David Strain has insisted that some children are “mature enough” to make a decision without the consent from their parents.

“Some children at the age of 12 are mature enough to make that call,” he told Sky News. “It will be dependent on people with training – the school nurse, the GP – people who have sufficient training to identify that.”

Dr Strain said a similar assessment could be carried out to that given to girls under the age of 16 who want the contraceptive pill.

“I would argue if we have children who are legally permitted to make decisions about whether they’re going to partake in underage sex, then a similar sort of competence procedure could apply to whether they have competence to take the vaccine or not”, he added.

Prof Anthony Harden, deputy chair of the JCVI, told This Morning Britain that the situation with vaccinating children is “very finely balanced”.

Therefore, with a final decision yet to be made, the debate rumbles on whether healthy children between 12-15 should be offered the vaccine, with many calling for clarity on the situation.

SEE ALSO: Reconnect with Yourself on World Wellness Weekend

Reconnect with Yourself on World Wellness Weekend