When someone mentions Caribbean food, what comes to mind? Jerk chicken? Rice and peas? Or maybe curry goat? Explore these other traditional dishes. 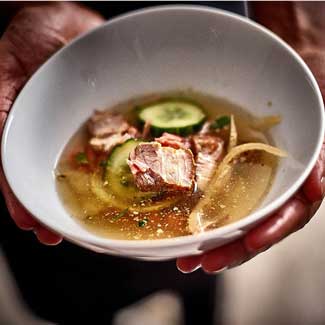 When someone mentions Caribbean food, what comes to mind? Jerk chicken? Rice and peas? Or maybe curry goat?

As much as these are delicious and widely-recognised, did you know that in a region which has more than 25 independent countries, there is a bounty of other dishes and a multitude of recipes you would find delectable?

Below are seven great Caribbean dishes—why not try them all?

If you are looking for the breakfast of champions, Mangú is the dish of choice! Hailing from the Dominican Republic, it is an extremely humble dish of boiled green plantains laced with butter—or oil. In Puerto Rico, it’s called mofongo, in Cuba, it’s fufu. A yummy way to start the day on a full tummy!

When it comes to food, the first thing to remember about Grenada is that it is known as the ‘Spice Isle’, being a major producer of nutmeg, cloves, ginger, cinnamon and cocoa. The one dish that really represents Grenadian cuisine is oil down. It is a slow-cooked, one-pot stew of cod, herring or salted pork simmered in coconut milk with breadfruit and taro leaves. The name of this dish comes from the fact that it is cooked until all the coconut milk has been absorbed and only coconut oil remains at the bottom of the dish.

Wonder what Bajans have on a Saturday for lunch? This Caribbean dish is also typically known as an ace hangover cure. If you’ve never had souse, you don’t know what you’re missing. Souse is essentially a clear broth of pickled pork (traditionally using the pig’s feet, tail, ear, snout and tongue) or chicken feet flavoured with onion, garlic, lime, hot peppers, cucumbers and other spices. Many people prefer to use lean pork meat instead. To tenderise the meat, it is first cooked and then slowly marinated until it becomes pickled. This ‘soup’ is traditionally served cold with steamed sweet potato pudding or black pudding.

Similar in process to ceviche, the ingredients are quite basic, but the dish is extremely popular.

Aruba and Curaçao are known as the happy islands. The Dutch impact there is undeniable—from the Amsterdam-like commercial buildings to the charming street signs. Being mostly made up of desert-like terrain, food goods are shipped in from overseas. So, traditionally, locals reuse the rinds of Dutch gouda and stuff it with what they have on hand. This dish is basically a lightly encased cheese around a filling of shredded chicken or pork, mixed with raisins, vegetables and nuts.

Pasteles, Pastelle or Ayaka
These moreish parcels wrapped in banana leaves are made around Christmas time, but the approach to the recipe differs slightly from island to island. Trinidadians make the small cornmeal pies stuffed with meat, fish or vegetables. They can be flavoured with herbs, raisins, olives and capers and are wrapped up and steamed in a banana leaf. In Puerto Rico, Pasteles are made with pork in adobo sauce wrapped in banana leaves and boiled—not steamed like Mexican tamales. This recipe is hard work, but well worth the effort.

Fire Engine is the Caribbean dish that is the ultimate definition of soul food. When you hear the words ‘fire engine’ we’re definitely not talking about fire trucks. This traditional Bahamian breakfast is an absolute delight. Canned corned beef is used instead of sliced beef, and it is sautéed with veggies and served with portions of rice. This dish will keep you satisfied until your next meal.

Coucou, also known as fungi, is found throughout the Caribbean. It is a dish of cornmeal served alongside corned beef, beef stew, callaloo or flying fish. Coucou is called turn corn in Saint Kitts and Nevis or turn meal in Jamaica. You can find it in the Virgin Islands, Dominica, Anguilla and Antigua, Saint Vincent and Guyana. Flying fish and Coucou served together are the national dish of Barbados. You can also make this Caribbean dish with breadfruit, cassava or pumpkin.

If you feel inspired to try something new, visit Tropical Sun Foods’s website (www.tropicalsunfoods.com), to discover an exciting array of delicious Caribbean and World Foods ingredients, explore some amazing recipes and get cooking!