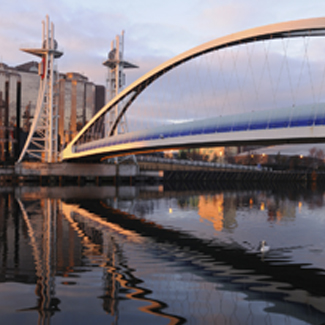 Where
Close to the thriving city of Manchester, the Quays area of Salford is quickly becoming one of the only areas in the north of England where property prices are steadily rising. As well as being home to thousands of new media jobs, the waterside development is attracting other professionals to the area, and its close proximity to Manchester Airport is another benefit to this location, flying to destinations as far afield as Singapore and Barbados.

Who
Professionals and young families.

Why
With the relocation of BBC North to Salford Quays taking place this spring, around 1,500 BBC jobs are moving to Manchester. The waterfront has been given a £650m transformation into a media village – MediaCityUK – complete with apartments, shops, restaurants and a hotel. As well as the BBC, the site will also be home to ITV, production companies and The University of Salford. The media village has already hugely boosted Salford’s economy and is set to do the same for the property market as new homes are quickly snapped up.

Gardening after a drought warning