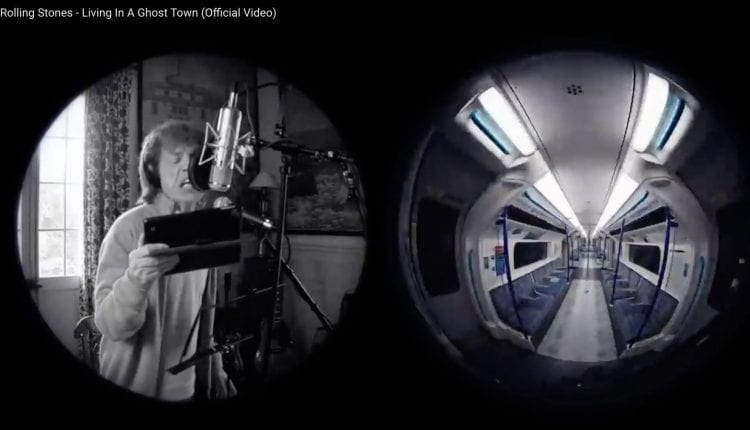 With lyrics including “Life was so beautiful, now we all got locked down / Feel like a ghost, living in a ghost town”, the track was initially recorded a year ago in Los Angeles but was “finished in lockdown”.

“We thought it would resonate through the times we’re living in,” said Rolling Stones singer Sir Mick Jagger.

“Keith Richards and I both had the idea that we should release it. But I said, ‘Well I’ve got to rewrite it – some of it is not going to work and some of it was a bit weird and a bit too dark’.”

Keith Richards said the song had been completed “via satellite” before being released on Thursday 23rd April.

Living In A Ghost Town is the first original song the band have released since two new tracks – Doom and Gloom and One More Shot – featured on their 2012 Greatest Hits album Grrr!

See also: Lady Gaga’s Nude Cyborg Takes Us Back to the Future

“You would imagine that playing outside would be more healthy than playing inside, but you don’t know… This is all in the realm of conjecture. It’s been a horrible time for everyone. But some people worse than others.”

You can see the official video here for The Rolling Stones’ first new song in eight years, Living In A Ghost Town, a blues track with lyrics referring to the coronavirus crisis.

Is Coronavirus Keeping You Awake? How to Get a Good Night’s Sleep in Lockdown

Scientists Launch Study of Effects of COVID-19 on Pregnancy