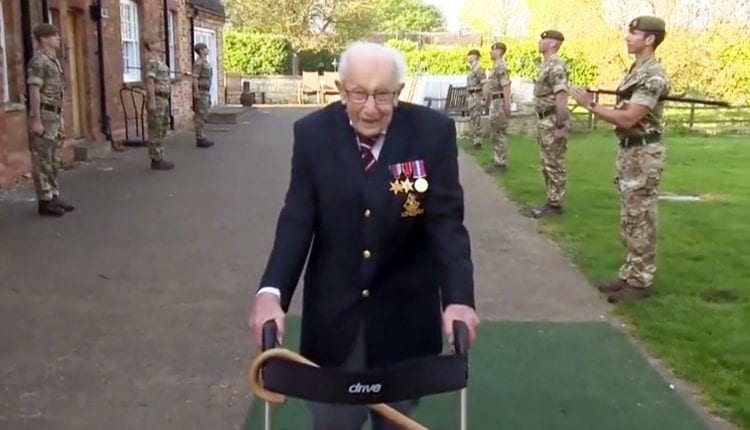 Captain Sir Tom Moore, the 100-year-old veteran who raised almost £33m for the NHS, has died with coronavirus. He had been suffering from pneumonia, and was taken to Bedford Hospital after requiring help with his breathing on Sunday.

Captain Sir Tom Moore became a hero to the whole nation when he walked 100 laps of his garden to raise money for the NHS before his 100th birthday. He was honoured with a knighthood in a unique ceremony at Windsor Castle, and said it was “an absolutely outstanding day”.

He had initially set out to raise £1,000 for NHS charities by repeatedly walking an 82ft circuit of his garden, but eventually raised £32,794,701 from more than one-and-a-half million supporters.

Captain Sir Tom, originally from Keighley, West Yorkshire, lived in Marston Moretaine, Bedfordshire. He served in Burma and the India campaign during the Second World War.

His daughter Hannah Ingram-Moore said he had been treated for pneumonia over the past few weeks and last week tested positive for Covid-19.

Mrs Ingram-Moore and Captain Sir Tom’s other daughter Lucy Teixeira said: “It is with great sadness that we announce the death of our dear father, Captain Sir Tom Moore.

“We are so grateful that we were with him during the last hours of his life; Hannah, Benjie and Georgia by his bedside and Lucy on FaceTime.

“We spent hours chatting to him, reminiscing about our childhood and our wonderful mother. We shared laughter and tears together.

“The last year of our father’s life was nothing short of remarkable. He was rejuvenated and experienced things he’d only ever dreamed of.

“Whilst he’d been in so many hearts for just a short time, he was an incredible father and grandfather, and he will stay alive in our hearts forever.”

Captain Sir Tom was given the honorary title of Colonel on his 100th birthday, and was honoured with a Spitfire and Hurricane flypast. He also broke a Guinness World Record by becoming the oldest person to have a No. 1 single with a charity version of You’ll Never Walk Alone, as well as having a special Royal Mail postmark dedicated to him.

Children and Diet Supplements: What They Need To Grow Healthy