From sparkling wine and oysters to cured meat and berries, World Food Tour celebrates some of the greatest produce in the United Kingdom 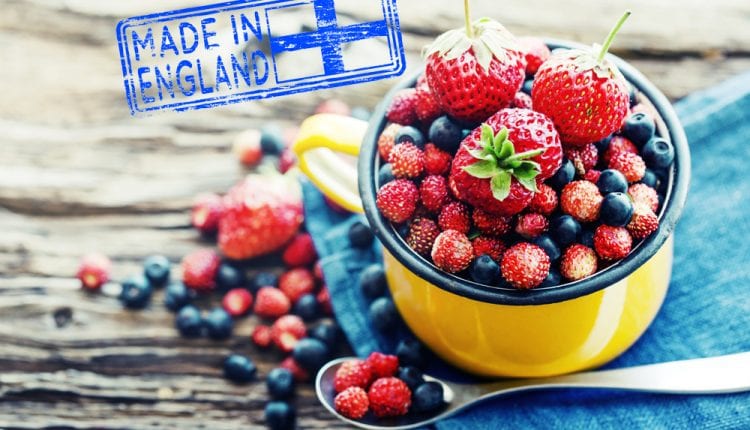 As a nation, we are becoming increasingly eager to eat closer to home and preserve taste traditions; British produce has never tasted better—or been more popular. Consumers are now more interested in knowing where their food comes from, a major factor fuelling small-scale and local production. They’re even willing to spend a little more money to ensure their food purchases help create local jobs, promote local economies and safeguard the environment. Read on for our selection of great British products—it will leave you seriously wondering whether there is still a need to look abroad for great food.

£132 million according to online business finance company, Funding Options. British sparkling wine has seen a dramatic rise in popularity over the past few years. Over 500 vineyards produce millions of bottles a year; five of the most celebrated names—Chapel Down, Nyetimber, Camel Valley, Denbies and Gusborn—produce more than five million alone. With milder climates being one of the main reasons for this welcome shift in the industry, it’s no wonder leading producers in countries like France are looking at us with envy.

The British soft fruit industry has seen a steady rise in the past decade. Locally-grown strawberries and raspberries now represent one of the most successful UK markets—their sales have risen by over 130 percent over the last four years. Previously seen as unreliable products prone to disease, damage and ruin due to unpredictable weather conditions, soft fruit is now an industry that’s able to keep up with its demand. This, in part, is due to the use of polytunnels—movable temporary plastic structures consisting of a tubular steel framework of hoops that provide protection to the fruit.

The British soft fruit industry has seen a steady rise in the past decade. Locally-grown strawberries and raspberries now represent one of the most successful UK markets—their sales have risen by over 130 percent over the last four years. Previously seen as unreliable products prone to disease, damage and ruin due to unpredictable weather conditions, soft fruit is now an industry that’s able to keep up with its demand. This, in part, is due to the use of polytunnels—movable temporary plastic structures consisting of a tubular steel framework of hoops that provide protection to the fruit.

As a beer-brewing country, we are beginning to be (rightly) recognised for our production of top fermented cask beer—or real ale. This product finishes maturing in pub cellars rather than in breweries and is exclusively sold with natural carbonation. Styles include brown ale, bitter, mild, old ale, stout, porter and India Pale Ale. The last decade has certainly seen an explosion of interest in craft beer—the choice presently available to aficionados of the drink is unparalleled. Visit Bristol and East London for a spot of beer tasting; the microbrewery industry has truly flourished here.

Cheddar making, which began in the town of Cheddar in Somerset, goes back more than 800 years. Today, the cheese is produced all over the world, but only a handful of makers are licensed to use the EU Protected Designation of Origin, ‘West Country Farmhouse Cheddar’. In addition to being an official seal of quality, this also means the cheese is made on a farm in Devon, Cornwall, Dorset and Somerset with locally produced milk and using traditional techniques—including cheddaring. Other world-famous British cheeses include Red Leicester, Wensleydale and Stilton, which is widely known as ‘the king of English cheeses’ and takes its name from a village near Peterborough.

A meat unequivocally shunned by the rest of Europe during the mad cow disease outbreak, British beef is now back on the map with a vengeance. The reality is that Britain, who ‘invented’ and revolutionised cattle breeding in the 1700s, produces some of the best beef offerings around. Experts have long maintained that the high quality of British beef is down to the fact that the animals are grass-fed all year round. Breeds like Angus, Galloway, Shorthorn and Longhorn—which are smaller than, say, their French counterparts—are docile and fast maturing. This results in tender meat with fewer nerves speckled throughout.

Considered to be among the world’s ultimate luxury foods, these molluscs are best when eaten during months that contain the letter ‘r’—for food fanatics, September signals the official start of the oyster season. Britain is home to some of the greatest oyster beds, a few of which are found in Kent, Devon, Cornwall, Essex, Scotland and Ireland. Much like land-grown produce, these shellfish will greatly differ in flavour depending on where they are sourced. Although individual taste preferences vary, it is widely accepted that oysters from Pyefleet in Colchester are the most highly regarded—and expensive—of all.

How to shuck an oyster

If you’re serving oysters at home, microwave them for a few seconds to prise the shells half open. Using protective gloves, wiggle a short knife into the shell from the frill or the hinge. Taking care to preserve the inside juices, cut the abductor muscle without damaging the mollusc. Serve chilled on crushed ice with lemon juice, vinegar or Tabasco sauce. If you’re not a fan of raw shellfish, oysters can also be slightly fried, grilled or baked.

Chicken is a major staple of the British diet and choosing the right  product is important. The new Omega 3 chicken range is unique to Waitrose (in the UK August 2017) and is the first chicken to be a natural source of omega 3; a ground-breaking move for the British supermarket. Omegas 3s are polyunsaturated fatty acids which—as a key part of a balanced diet—help to maintain normal heart, brain and vision function.

The chicken is naturally enriched by feeding the birds on a diet containing algae, an aquatic plant that is naturally rich in omega 3. The Omega 3-enriched chicken was developed in partnership with leading food company Moy Park and agri-technology company Devenish Nutrition. Clinical trials performed by Moy Park showed that the levels of omega 3 in their chicken exceeded the levels needed to meet the Food Standards Agency criteria for delivering health benefits.

How to Live with Your Gastric Bypass

Chocolate Brownies Made With Coconut Oil