In a conversation with Hannah Guinness, Property & Home’s Guest Editor, Phil Spencer, shares his views on everything from the property market to energy efficiency. 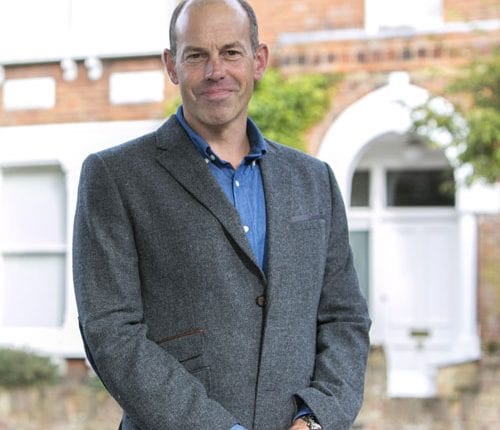 You left London and moved to Hampshire last year. How are you finding country life?

I love it. I’m a country boy at heart, born a farmer’s son, and we had a very happy time in London for 25 years but we were all very keen to get some fresh air and nature, so we really love country life. We’ve got ponies and sheep and chickens and dogs—it’s a big change, but it’s one we were looking forward to.

In the last issue you predicted a long term increase in house prices. After a busy start to 2016, how does the property market look for the rest of this year?

I think it’s stable. There’s been a lot written recently about the fact that the London market is quiet, and that the top end of the market is virtually non-existent, and that’s absolutely true.
Why is that? Stamp duty really wounded that market, but what has happened as a result is that while London has slowed down, commuter towns have benefited because people are looking for better value elsewhere, more space for their money, and the market is filtering out.

The market everywhere is very price sensitive and people are understandably cautious, but people still die, divorce and pick up debt and people still get new jobs and children change school, and all the various normal domestic behaviours continue, and whilst people have perhaps been sitting on the fence for a little while there comes a time when real life catches up and we need to get on and move.

Housing has been a big topic in politics recently. Do you think there is a housing crisis, and if so how would you solve it?

Why do you think there’s been such a big rise?

Housing associations benefits, so the amount of money the state will support a family or an individual with their housing needs, has been reduced. Also, there used to be cap on what a private landlord could charge a housing association in a particular area, to rent their property. That cap has been increased so it’s the perfect storm: you’ve got an increased amount of rent that a landlord can charge and you’ve got a decrease in the benefits available to an individual, so you’ve got a massive gap in the middle.

What do you think needs to be changed?

One of the problems with housing as a topic in this country is that it is a bit of a political football and therefore we don’t have long-term solutions. Look at what the current government did—the Help-to-buy schemes. They have helped the market but there’s always more that could be done, but a government is only in office for a very short period of time so I think the tendency is to have fairly short-term policies, policies that win votes. The problem that we’re in now is the result of decades of housing policy. It isn’t something that’s been created in the last five or ten years, it’s been a long time coming, and it’ll take us a long time to get out of it, but it’ll take even longer if all of the political parties have their own separate policies. It would be great to see a unified policy right across all political parties that everyone could buy into.

Investors have been racing to get ahead of the changes to stamp duty on Buy-to-let properties—what effect has this had on the market?

What I feel is the biggest change to Buy-to-let and is likely to have a long lasting effect is the reduction in ability to have your mortgage interest repayments as tax deductible. That’s going to be phased in between now and 2020. The great attraction about Buy-to-let above and beyond other forms of investment, was the ability to gear up. If you had a 10 percent deposit you could borrow the other 90 percent to buy a house. If that house goes up by 20 percent in value you benefit by the full 20 percent even though you’ve only put 10 percent in. So that is what has been the whole driver behind Buy-to-let, it’s why people who have got large portfolios have made very good money. The tax changes on the mortgage repayments are reducing that to the point that it’s non-existent, and that means that Buy-to-let is not going to be particularly attractive. It’s not the end but the people who remain in it or are trying to get in it have to understand their numbers and really get their accountants onside.

The whole purpose of increasing stamp duty and the decrease in mortgage interest being tax deductible is to make investing in property and buying second homes less attractive, and I understand because we’ve got a housing problem, people need somewhere to live and the government are trying to make it more possible for more people to buy their own properties, but we’re doing it against the backdrop of the difficulty of getting mortgages, of higher deposits, of not building enough houses. If you reduce the number of investor-owned properties there’s less properties for tenants to choose from. We come back to supply and demand. If they’ve got less to choose from then demand is high, that means prices rise, if prices rise on rent because there aren’t enough investors then it becomes ever more difficult to save up for a deposit to buy a property.

Much has been made about the rise of ‘Generation Rent’. Do you think we’re set to see a long-term trend towards more people renting? Or is this just exaggeration by the press?

Well I hope not, it would mean a real cultural shift and a change in society. An Englishman’s home is his castle, that’s been a mantra throughout history, but we are more mobile now, people aren’t as permanently fixed in their careers, or jobs or homes as they used to be, we live in a faster world. We’re not good at waiting for things any longer. Our parent’s generation made quite large sacrifices, it was a massive thing to buy a house and you saved up for years—we’re not very good at that nowadays. We’re more demanding of our kind of lifestyles. We go on holiday, we drive cars, we go out to dinner, we spoil ourselves in a way that previous generations didn’t, and that means it’s harder to save up for a deposit.

In the year 2000 60 percent of people in London owned their own properties, and it’s been estimated that by 2024—so another nine years—60 percent of Londoners will be tenants. But I would always encourage people to try and do whatever it takes to get themselves on the ladder. It’s far better off to be paying off your mortgage and paying it down than you are paying rent and paying somebody else’s mortgage down.

What would you say are the biggest challenges facing the housing industry and market right now?

It’s supply and demand. We’re not building enough houses. I’ve been following the housing market for over 20 years, and I do not remember a single year where the government target for new builds has been met, not a single year. But that said I don’t want the field next to me to suddenly have 20 houses. So, we’ve got to recognise that we have a housing problem, but also that people fight tooth and nail to reject planning permission for developments near their home. Equally, we have a wonderful green belt in this country that we need to protect, so there are lots of issues, none of them straightforward. As a society if we could somehow find the balance between protecting our beautiful countryside and building new homes, that would help.

There’s concern that construction of new homes is going to lag behind demand yet again in 2016. What’s your view on this?

It constantly does lag behind, and I don’t feel that’s ever going to change. It’s a known fact that the major developers have land banks, that they buy up land with the view to developing it one day, or they get options on buying land should they get planning permission, so they know what they’re developing for the next five years, possibly even 10 years, and they’ve bought a site with no intention of developing it for a long period of time.
But I just wonder, seeing as we do have this pressure, this inbuilt imbalance between supply and demand, and that keeps the pressure on prices, I wonder whether there’s a vested interest to not build enough. Because if they don’t build enough, if none of them build enough then that maintains the pressure on prices because there’s always more demand than there is supply.

See also: Get Started as a Landlord

Is energy efficiency set to become the norm rather than the trend?

Yes I do. I don’t yet feel we’re quite at the point where it’s putting pounds and pence value on a property, but it is absolutely helping with the decision to buy. I didn’t choose my house because it’s carbon neutral, but when looking round the house it was a big tick in the box that it wasn’t going to cost anything to run. It helped with marketability and the decision to buy, rather than whether to pay more money for it. It’s got to become the norm, energy efficiency, and being more aware of it, because we’re pretty terrible at it in this country. We’re getting better but we’ve got an awful long way to go to catch up with our European friends.

Finally, are there any new trends in the property industry that you’re excited about?

Internet estate agencies, that’s here to stay. Even 12 months ago it wasn’t being taken seriously by the industry or particularly by the consumer, and now it’s clear that market is here to stay, so traditional high street agents are now genuinely having to compete with internet-based agents who do a different job with very different costs and price points. It will be interesting to see how that pans out over the next 12 months.
I think this last year we’ve seen a lot more online agents start up and they won’t all survive—over the next 24 months I expect to see the market really get shaken up. That’s exactly what we saw with the portals, there were loads of them at one point and now it’s down to Zoopla and Rightmove.

Do you think high street agents will survive?

The ones who provide value for money, absolutely. It’s a personal business; people want to deal with people not computers when making such a big decision. That’s not to say there isn’t market for a different level of service. There’s only a certain amount of people that move every year, and there’s a hell of a lot of agents out there. So the good ones absolutely will survive and prosper, if they concentrate on their customer service, on their advice and provide value for money. The moment they stop providing value for money they’ll go under, the same with any business.

Down to Earth: Geothermal Heating