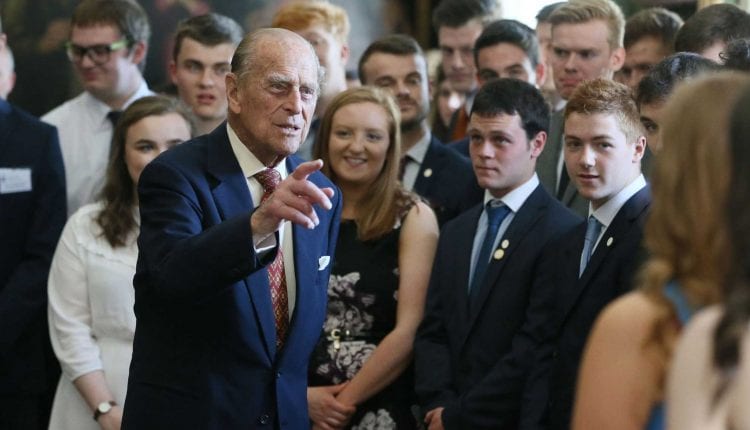 Thursday 10th June would have been the 100th birthday of Prince Philip, the Duke of Edinburgh, who died on April 9th.

To mark the event, the Duke of Edinburgh Award scheme is launching its biggest ever campaign, asking everyone, not just young people, to take on their Do It 4 Youth challenge.

In a four-week challenge styled on the Duke of Edinburgh Award, the fundraiser will present physical and skills challenges in four categories – Get Up, Skill Up, Free Up and Hand Up.

Taking on one challenge per week, over the four weeks participants should have completed a Get Up, Skill Up, Free Up and Hand Up task.

See also: A Tribute to HRH Prince Philip the Duke of Edinburgh: Part 1 – The Early Years

The aims of the Do It 4 Youth initiative are similar to those of the Duke of Edinburgh award which Prince Philip set up in 1956, and which has been undertaken by people around the world.

Money raised from Do It 4 Youth will go towards helping young people from underprivileged backgrounds.

Yo don’ need any prior Duke of Edinburgh Award experience to take part in the Do It 4 Youth challenge, which is open to people of all ages. All you have to do it sign up on the website, where you can log which challenges you’ve completed so far, and give details about what you did. You can choose to complete the four-week challenge any time from 10th June, but it must be completed by 30th September 2021.

If you raise over £25 you will be entitled to a free T-shirt, and those who raise over £100 will receive a limited-edition pin.

The initiative is been backed by celebrities who are “team captains”, who will work with a DoE Award holder to encourage as many people as possible to take part. Celebrity faces include Strictly Come Dancing star JJ Chalmers, Paralympian Hannah Cockroft, guitarist from The Vamps James McVey, Harry Potter actor Oliver Phelps, and many more.

JJ Chalmers said: “Over the past year and a bit we’ve really come to appreciate what is important and who we need to look after. That’s what the beauty of this challenge is. It’s quite simple, it’s to do something for yourself and do something for others.

“When we talk about getting back to normal after this pandemic, I don’t want that stuff to stop. I’m happy to stop the Zoom meetings but the really nice stuff, appreciating the people around you and helping one another, that should stay.”

“Every pound you raise will go towards helping young people from the toughest backgrounds across the UK to build life-long belief in themselves through DofE.

“But time and again, we’ve seen that when we help young people build belief in themselves, there are no limits to what they can overcome.”

Meanwhile the Queen has marked what would have been the Duke of Edinburgh’s 100th birthday with the planting of a newly-bred rose named after her late husband.

She received the gift from the Royal Horticultural Society (RHS) and watched as it was planted in the gardens at Windsor Castle last week to remember Prince Philip.

The Queen described the Duke of Edinburgh Rose, which is deep pink and double-flowered, as “lovely” and the tribute as “very kind”.

RHS president Keith Weed told the Queen: “It’s a rose named the Duke of Edinburgh Rose to mark his centenary and it’s a commemorative rose for all the marvellous things that he did over his lifetime and for everyone to remember so much that he did.

“Each rose, there’s a donation that goes to the Living Legacy Fund which will help more children. It’s a beautiful flower in itself, a double flower.”

The Society will donate £2.50 from each rose sold to The Duke of Edinburgh’s Award Living Legacy Fund, which will help one million more young people from all backgrounds and circumstances take part in the youth award scheme set up by Philip in 1956.

Since his death the fund has already raised half a million pounds.

Before his death the palace had discussed plans to mark the Duke’s 100th birthday, but with the coronavirus pandemic it would always have been a low-key event.

There is, though, talk of a new royal yacht named after Prince Philip which could be ‘commissioned within weeks’, costing as much as £200m. The Daily Telegraph reports that the ship would replace HMY Britannia, which was decommissioned in 1997.

Since the Duke’s death, the Queen has returned to official duties and on Sunday will play host US president Joe Biden and First Lady Jill Biden at Windsor Castle.

There’s also been royal controversy this week, as the Palace is embroiled in a row over whether the Queen was consulted over the naming of the Duke and Duchess of Sussex’s daughter.

Harry and Meghan’s decision to name their second child Lilibet, a childhood nickname of the Queen, was seen as an attempt by the couple to try to mend their rift with the royal family, but the couple’s suggestion that the Queen gave her blessing for the name appears to have deepened divisions with the palace, with the BBC’s royal correspondent, Jonny Dymond, reporting that the Queen had not been consulted about the name.

Are We Closer to a Treatment for Alzheimer’s?

Managing a Rental Portfolio with Lendlord