Caldo Verde is a delicious Portuguese dish comprising all the staples of a Mediterranean diet; learn how to recreate it at home with this recipe. 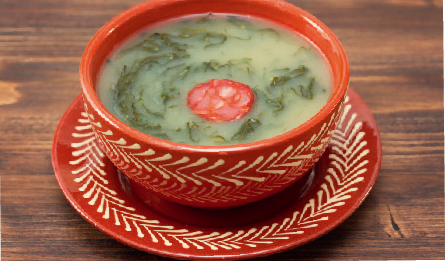 Although the Portuguese men’s national football team has made seven appearances in the FIFA World Cup, their best result to this day is a mere third place, which they accomplished in 1966. The current reigning European champions—captained by the ever-charming Cristiano Ronaldo—will be playing for a chance to take their first World Cup title.

1. In a heavy-bottomed pot, add potatoes, onion, garlic, olive oil and broth. Bring to the boil, lower heat to medium and cook until potatoes are tender. Mash the potatoes and bring them back to the pot.

2. Using a blender, blend the soup until smooth.

3. Cut the collard greens into thin strips, add them to the soup. Stir and cook for 15 minutes.

4. In a large skillet, fry the chorizo and bacon until browned, add to the soup and cook until it boils again. Season with salt and pepper and serve hot with extra olive oil.