Pork Pie on the Rise 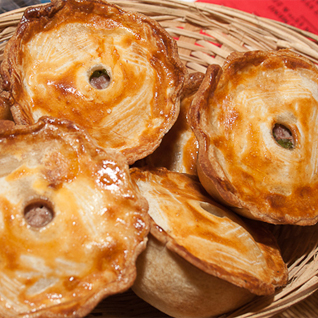 The reputation of the humble pork pie is on the up with the savoury snack no longer being viewed purely as a picnic staple. More and more foodie Brits perceive the pork pie as ‘posh grub’ worthy of being served up at a dinner party or trendy restaurant according to new research.

A survey out on 5 July 2013 reveals that the traditional British snack is now considered haute cuisine.

According to a poll of 1,000 people by Pork Farms – to launch its new ‘Your Pie, Your Way’ campaign – pork pies are increasingly being seen as a ‘luxury’ treat to be savoured at all sorts of occasions, rather than gulped down as a snack.

The research from the nation’s favourite pork pie brand found that over half (58 per cent) of those quizzed would happily serve up a pork pie at a dinner party, trumping caviar, with just 17 per cent of the vote and scallops with just 33 per cent.

It also found that one in ten (10 per cent) of those asked would order a pork pie at a restaurant and that four per cent have even tucked a pie away in their luggage before going on holiday.

Over a third (37 per cent) said they would rather tuck into a crusty pork pie than posh canapés and two per cent surprisingly revealed their favourite place to eat the iconic snack was in bed.

The poll also found 100 out of the 1,000 would happily serve up a pork pie for the main course for a romantic meal whilst 20 per cent said the ‘main reason’ they couldn’t be a vegetarian was their ‘love of pork pies’.

Pork Farms’ customers have been sharing their favourite ways to enjoy pork pies with one revealing he eats pork pies with banana, one preferring to indulge on a rollercoaster and some who admit to eating them in the bath. Meanwhile, the research reveals over half of Brits say their perfect picnic wouldn’t be complete without pork pies.

Respondents were also asked where they would have their ‘perfect picnic’.  Brits’ top choice was by a river, with over a quarter (27 per cent), closely followed by on a beach, with 24 per cent of the vote and nearly one in five (18 per cent) voting for the park.

In fourth spot with 12 per cent was a picnic up a mountain, with the rest choosing a picnic at an airport, by the side of a road, in the car, the back garden or even on a bus.

Andy Napthine, Head of Marketing at Pork Farms said: “Pork pies continue to be one of the nation’s best loved snacks, but everyone has their own unique way of enjoying them. It might be that they love to eat pork pies at a certain location, with a particular accompaniment or with loved ones (including pets!).  Since launching the campaign we’ve already had over 2,000 suggestions from pork pie lovers out there, from the traditional to the weird and wonderful. But we want to hear more!”