Peter Andre is the family man with a career spanning music, TV, children’s books and now coffee, having just opened the first in a chain of coffee houses. Chatting to Kerry Spencer, Peter reveals he likes nothing better than spending time with his three children and what his plans are for Christmas and 2012 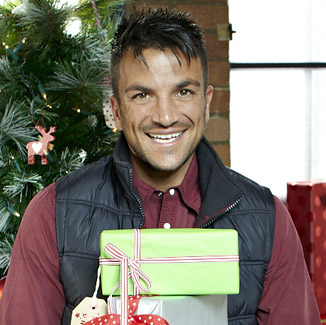 What are your plans for Christmas this year?
Ever since I’ve had children I’ve celebrated Christmas and prior to that I didn’t really celebrate it because in Australia it’s a hot summer [at Christmas] so we’d be on the beach with cold drinks, cold turkey. This Christmas will be like what I’ve done for the last six years, which means I’ll be making sure Santa comes and visits, brings all of the presents the kids want, with a few little surprises. I’ll make sure the reindeers come and eat their carrots and Santa comes and takes a bite out of the mince pie! It will be a good build up this year too; I love getting gifts for my family and friends.

How do you get into the Christmas spirit at home?
I love all of the Christmassy films – Home Alone, The Snowman. I love the classics as well – The Wizard of Oz, ET, Shrek. The build up is all about the movies and food! We’ll also find time to go skiing before Christmas too.

What are you looking forward to most about Christmas this year?
The food! And seeing the kids’ faces when they’re like, ‘You must be kidding me, do I have to eat again?’

What do you cook at Christmas?
I’m really into cooking. I like a big fat roast lamb, I much prefer that than turkey. Then we pig out on the day. It will involve loads of chocolate and we might go into the tent and roast some marshmallows.

What would you like for Christmas?
For me it’s always practical stuff. I want stuff like really comfortable PJs or slippers, or a pair of trackies or a toothbrush holder because I’m always travelling. I like buying my own gadgets so I don’t need anyone to buy me things like that.

What do you enjoy most about spending your Christmas here in the UK?
My children, that’s my number one thing. I also love that England has that traditionally traditional Christmas. The weather lends to it more here than in Australia.

What’s the best gift you’ve ever received?
I know this will sound totally corny and cheesy, but my children are the greatest gift I’ve ever received. My firstborn was the best gift. I love all of my three children equally, although Harvey is not biologically mine, I’m his stepfather, but the experience of my first child being born was something I will never forget.

What are your plans for New Year?
Over New Year I prefer to be overseas or performing. Every other year I have the kids over the New Year, as that’s the way it works [Peter shares responsibility of his three children with ex-wife, Katie Price]. The perfect New Year would be seeing it through with the kids, family and friends and having a big party at home.

What dishes do you like to cook?
I love to cook and I love cooking Italian style. I used to do this dish, four pastas with four cheeses and four sauces – beautiful. I like the French sauces too and Greek dishes – barbecue rotisserie stuff. And my profiteroles are the best you’ll ever taste in your life!

Will you be serving your profiteroles at your new coffee house?
Maybe, we could call them Pete’s Profiteroles, but they do take ages to make!

What are your favourite restaurants?
For Thai food I’ve been going to the Blue Elephant on Fulham Road for nearly 18 years. For Italian there’s a great little one in Shepherds Bush called Cibo, Nobu for Japanese, but Andre’s house has the best menu!

What’s your idea of the perfect date?
Cooking dinner or going to a really classy restaurant. You’ve got to be somewhere where it’s perfect so you can talk with a nice glass of wine and to relax and get to know each other, and I’d play Sade or Anita Baker, it’s so relaxing.

Would you like to marry again?
Definitely. Time is not only a great healer but a great provider. I don’t think anyone needs to rush into anything, but when it’s right you just know it.

Would you like more children too?
Originally I wanted six kids because I’m one of six and dad’s one of 12, but after I’d had the three, I then said, ‘I’m content’. But when I meet the right girl, I will want to have a family with her too.

How did fatherhood change you?
It completely changed me. I have the kids half the time. Any parent would rather be with their kids 24/7. Being a father makes you completely selfless and from that day on [when you become a father], nothing is the same as you’ll always put your children first.

You and your brothers have just opened a coffee house. How did this new business come about?
It’s called the New York Coffee Club. Mikey, Danny and I were sitting in a coffee house in New York a few years ago, a really cool little café, and we looked at each other and said, ‘one day’.Then when we were talking about names, Mike said, ‘I know, why don’t we call it the New York Coffee Club?’ It’s New York themed in the sense that everything is bigger – the deli sandwiches are going to be big, big croissants, all fresh produce. The coffee is going to be good quality coffee too. I know my coffee and I know a good coffee. I really like strong coffee, however for the marketplace it will be a little more toned down.

TV presenting, singing, reality shows; what area of entertainment do you prefer?
Where I feel most comfortable is on stage in a concert environment. Not necessarily singing live on TV, but live in an arena. A close second would be presenting on a TV show, I love doing that. I’ve now started to get into speaking and giving speeches. I think not doing red carpets and all of that, it’s being in a studio and presenting a TV show.

You recently launched a collection of children’s books. How did this come about?
Well, basically I’ve always done stuff with my kids, read stories on the reality show, and the people from Penguin [Books] thought it would be a good idea for me to do children’s books. They came up with the idea of first day at school, or your first time at the dentist, and different scenarios, and I said ‘Yes, that’s brilliant!’ I used my own experiences as a kid for the books.

Here to Help, which aired during the summer, saw you travel around the country to help people and charities in different circumstances. How did you relate to the idea of the show?
I just think [Here to Help] was such a great little idea. I grew up loving Jim’ll Fix It and when I was growing up living in Australia there was another lady with a show called Challenge Anika, which I never saw, but it was apparently very popular, and I love the idea of giving something back to people. If you’re in a position to do that and help other people, I just think go for it because you could change someone’s life so quickly. It was really good fun.

Is there going to be a follow up series of Here to Help?
I’d like to do something on a bigger scale next time. I think we’ll be keeping with a similar, Jim’ll Fix It concept, but in a much bigger way.

Which episode of Here to Help stood out for you?
The one that has always stuck in my mind the most is Jody, whose father passed away. If she reads this, I’d really like her to get in touch as I don’t know how to get in touch with her now and I’d really like to know how her and her family are doing.
I thought she was such an amazingly brave girl and such an inspiration. I was really touched by that.

Who in the music industry would you like to collaborate with?
I would like to do a show and an album with the legends and go back to all of the people who have inspired me, like Stevie Wonder, James Ingram, Anita Baker and George Benson. That would be amazing.