Pamela Anderson has been left in tears after she heard about the plight of Sunder, a young elephant who has been beaten so badly that he sustained an eye injury 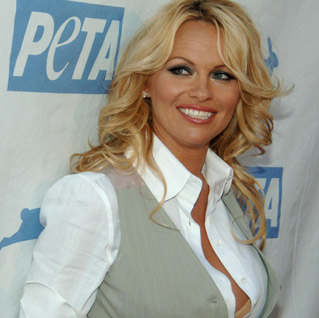 Pamela Anderson fired off a letter to Vinay Kore, a member of the legislative assembly of the Indian state of Maharashtra and the leader of the Jan Surajya Shakti Party, from her home in Malibu, California.

The blonde bombshell with the big heart, who visited India in November 2010, wants Sunder to be removed from Jyotiba Temple in the Maharashtra district of Kolhapur and sent to a sanctuary in order to spare him further suffering.

In the letter to Vinay Kore, Pamela wrote, ‘I am in tears over the plight of the little elephant, Sunder, who you so kindly gave to Jyotiba Temple with the best of intentions. … He is the age of one of my sons, and as sensitive as anyone’s child’

She added, ‘Sunder must be rescued without delay. May everyone, including me, count on you, please, to save this youngster?’

Anderson’s plea follows PETA India’s discovery that Sunder was being abused by his handler, who has been on the run from police since the group became involved. Sunder, who sustained injuries after the handler jabbed him in the right eye with an ankus (a sharp, hooked metal poker-like weapon), is also confined to chains with sharp spikes and is kept alone inside a dark shed. Lesions all over his body indicate past beatings by the handler.

A scandal is growing over the way some elephants used in Indian temples, to represent the Hindu god Ganesha, are being housed and mistreated. Frequently controlled through beatings and prodded and gouged in sensitive areas behind their knees and ears with an ankus, they languish without veterinary care for even serious conditions, sustain leg injuries and are fed unsuitable food. Many elephants at Indian temples also show signs of severe psychological distress, such as swaying, head-bobbing and weaving – behaviour not found in healthy elephants in nature. Elephants also suffer from a lack of exercise and years spent standing in one position on hard concrete surfaces amid their own waste, which can lead to painful and crippling foot ailments and arthritis.