On His Seventh Birthday, 10 Things You Didn’t Know About Prince George 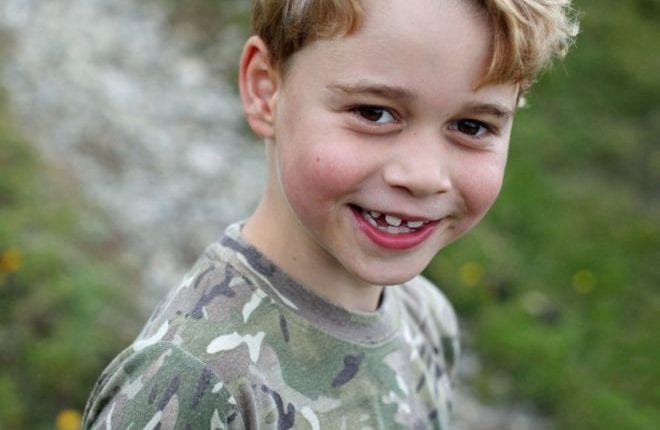 The Queen also shared one of the two pictures released by Kensington Palace to mark the occasion.

It was followed by a post from Prince Charles and the Duchess of Cornwall, who wrote: ‘Wishing Prince George a very happy seventh birthday today!’

Two photographs were released last night by Prince William and Kate Middleton, taken by the Duchess earlier this month at the family’s Norfolk home, Anmer Hall.

George and his siblings, Princess Charlotte, five, and two-year-old Prince Louis, have spent lockdown there and will enjoy a family party today.

Here are TEN facts you never knew about the heir to the throne;

Who Are the Top 10 Celebrity Animal Lovers?

10. His full name and title is Prince George Alexander Louis of Cambridge. George was the name of Queen Elizabeth’s father George VI and the prince will be the seventh King George on the throne. Alexander is thought to be in tribute to his Great Grandmother, the Queen, whose full name is Elizabeth Alexandra Mary.

Louis is thought to be taken after his father, William Arthur Philip Louis, as well as the Duke of Edinburgh’s uncle, Lord Louis Mountbatten.

Prince George was the fifth ‘senior’ royal baby to be born at the Lindo Wing, and the 11th member of the extended Royal Family. His father and uncle were delivered there, as well as Peter and Zara Phillips, and cousins including Lady Gabriella Windsor and The Earl of Ulster.

See also: As Prince Charles Speaks Out On Food Production, 10 Facts You Didn’t Know About the Heir to the Throne

In line to the throne

9. George is the Queen’s great-grandson, and is in line to become the 43rd monarch since William the Conqueror, after his father William and his grandfather Charles.

The ceremony used a font that was made for Queen Victoria’s first child and water from the River Jordan. The Royal Mint issued a set of commemorative coins to celebrate the christening, the first coins to mark a royal christening in Britain.

8. Prince George is said to bear a strong resemblance to his mother Kate’s brother James Middleton, who also had short fair hair and large brown eyes as a youngster child.

7. For his christening Prince George took part in a historic photograph with his The Queen, his father and his grandfather, a four-generation photos that has only been matched by Queen Victoria in the 1890s.

6. Prince George has seven godmothers, one of whom is Julia Aline Samuel, a British psychotherapist and paediatric counsellor, daughter of James Guinness and sister of Sabrina Guinness. Appointed Member of the Order of the British Empire (MBE) in the 2016 New Year Honours for services to bereaved parents of babies, she is Vice President of the British Association for Counselling and Psychotherapy and is an Honorary Doctor of Middlesex University. She became close to Lady Diana Spencer, George’s grandmother, after meeting her at a dinner party in 1987.

Another of Prince George’s godparents is the Duke of Westminster, one of Britain’s wealthiest men.

5. George goes to school at St Thomas’ Battersea, as does his sister Charlotte. Fees there are over £6,000 per term. Outside school George is said to like dancing, aeroplanes, and tennis, and his favourite films are Paddington, The Lion King and How to Train Your Dragon. He is learning Spanish from his nanny Maria Teresa Turrion Borrallo, who was born in Palencia.

4. The Duke and Duchess of Cambridge’s home Anmer Hall, where George has been staying during lockdown, is a 10-bedroom mansion on the Queen’s 20,000-acre private Sandringham estate.

3. The family has celebrated three other birthdays during lockdown – first Louis’s second, then Charlotte’s fifth, and William’s 38th.

2. Prince George is already a seasoned traveller. His parents took him on their royal tour of Australia and New Zealand before his first birthday, and he also went to Canada along with his younger sister, Princess Charlotte. Both have also accompanied their parents to Poland and Germany.

Prince George has also been a pageboy at no fewer than three royal weddings – for his aunt Pippa, his uncle Harry and his cousin Princess Eugenie.

1. In 2018, Prince George became the youngest person to be named on Tatler’s best-dressed list, joining his mother and his aunt, Meghan Markle.

Turf Wars: Is Artificial Grass the Ultimate Convenience or An Ecological Disaster?