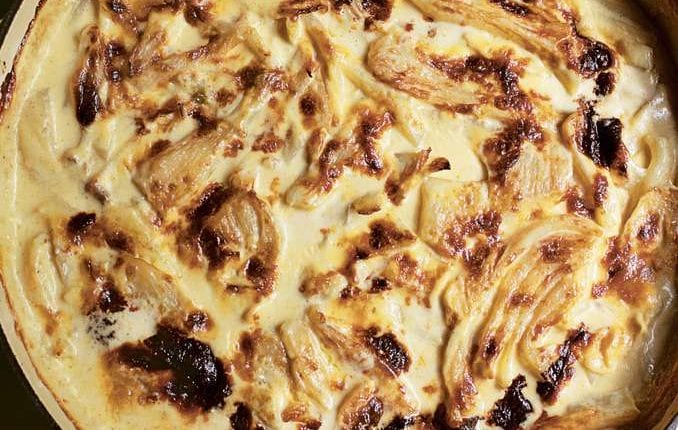 Nigella Lawson’s fennel and Gruyère gratin is the ultimate celebration of this often under-appreciated vegetable. Make it as a side dish for a roast or the centrepiece of a meat-free feast. From the book Cook, Eat, Repeat by Nigella Lawson, a collection of recipes you’ll want to make over and over again, including quick and easy meals, Christmas comfort food, and stunning bakes, interspersed with witty, thoughtful, and beautifully written essays.

Nigella says: “This creamy gratin is a special treat for fennelphiles. The nuttiness of the Gruyère partners beautifully with that gentle aniseed flavour. Frankly, I could lap up the fennel-vermouth-and-cheese-deepened cream with a spoon. And often do. While it’s rich and deep in flavour, it is fairly fluid; if you want it to be thicker, make the gratin up ahead of time, since it thickens as it stands. I often halve this for two, baking it in a shallow round ovenproof dish 23cm in diameter and 5cm deep.”

Make Ahead – Assemble dish to end of step 5 up to 2 days ahead, press food wrap onto surface to submerge fennel and refrigerate. Bake, allowing an extra 15 minutes, until piping hot.

Store – Refrigerate leftovers, covered, for up to 1 day. Reheat in microwave or transfer to ovenproof dish, cover with foil and heat in a 180°C/160°C Fan oven until piping hot.

Freeze – Freeze leftovers in airtight container for up to 3 months. Defrost overnight in fridge. Reheat as above.

Hopes for Coronavirus Vaccine Before Christmas