Nifty at 50 – Which Other Celebs Share Amanda Holden’s Birth Year? 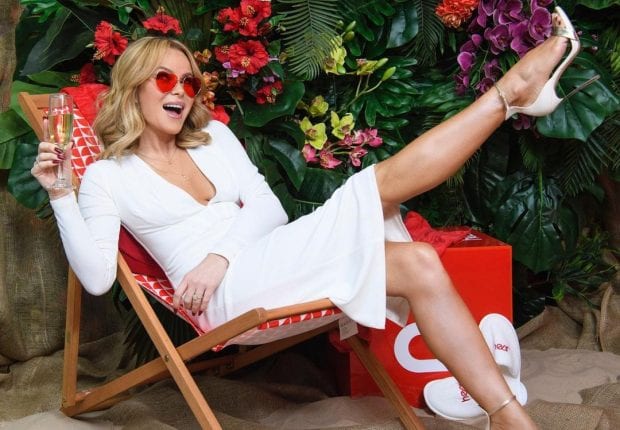 Amanda Holden celebrates her 50th birthday this year, and has been pictured posing nude on a giant cake to celebrate. But she shares her birth year, 1971, with loads of other celebrities, some of whom we’d be happy to see nude on a birthday cake, others, not so much. Which of our selection of 10 hemi-centenarians would you have guessed were 50 this year?

Actor Jared Leto was voted one of People Magazine‘s Most Beautiful People in the World in 1997. Born in Louisiana, he studied painting and acting in New York and moved to Los Angeles to pursue a career in music. But acting roles on TV including My So-Called Life brought him to the attention of Hollywood and he was soon appearing in movies including How to Make an American Quilt (1995), Urban Legend (1998), The Thin Red Line (1998), Fight Club (1999), American Psycho (2000), and Mr. Nobody (2009). In 2016 he played Joker in Suicide Squad and is returning to the role in Zack Snyder’s new cut of Justice League in March.

Jared Leto is also the lead vocalist, multi-instrumentalist and main songwriter for the band Thirty Seconds to Mars.

The actor previously known as ‘Marky Mark’ succssfully made the transition from teen pop idol to respected actor, escaping from boy band New Kids on the Block to form Marky Mark and the Funky Bunch, and from there into a career in modelling and then acting.

Born in Boston, his youth was mis-spent on petty crime, violence and drug use, and even his later career was spotted with violent and racist incidents. But his performances in Boogie Nights (1997), The Departed (2006), which won him a Best Supporting Actor Oscar nomination, The Fighter (2010), and Ted (2012) won him a reputation as a versatile actor. He still says that his favourite role was Max Payne (2008). The successful comedy Entourage (2004) was partly based on his experiences in Hollywood.

Mark Wahlberg is distantly related to Madonna, and also to Céline Dion.

Ewan Gordon McGregor was born on March 31, 1971 in Perth. His uncle is actor Denis Lawson. He studies at London’s Guildhall School of Music and Drama alongside Daniel Craig and Alistair McGowan, but left just before graduating after getting a role in Dennis Potter’s series Lipstick on Your Collar (1993). He leapt to fame in Shallow Grave (1994) and Trainspotting (1996), but is now probably best know for playing the young Obi-Wan Kenobi in the three Star Wars prequels. He was awarded the OBE in the Queen’s 2013 New Years Honours List for his services to drama and charity.

Named after a town near to her birthplace in Minnesota, Winona Ryder was born Winona Laura Horowitz and is the goddaughter of psychedelic guru Timothy Leary. Her parents moved to California when she was 10 and by 13 she was getting acting roles. She made Welcome Home Roxy Carmichael and Mermaids in 1990, and also appeared in Edward Scissorhands (1990), Little Women (1994), Black Swan (2010) and The Dilemma (2011).

She lived with Johnny Depp for many years, in 1997 was chosen by People magazine as one of the 50 Most Beautiful People in the World and ranked #42 in Empire magazine’s Top 100 Movie Stars of All Time list, and picked up a conviction for shoplifting designer clothes in 2001. Most recently Winona Ryder has appeared in Netflix series Stranger Things, though apparently someone had to explain to her what ‘streaming’ is.

The Scottish actor born David McDonald took his stage name from the Pet Shop Boys‘ Neil Tennant. He was inspired by his love of Doctor Who to become an actor, and made his first professional acting appearance at the age of 16. He worked regularly after graduating from the Royal Scottish Academy of Music and Drama, spending several years as a member of the Royal Shakespeare Company, and became famous from his lead roles in TV dramas Blackpool (2004) and Casanova (2005).

In 2005, his childhood wish came true when he won the part of the Doctor, which he played for five years. He married Georgia Moffett, daughter of previous Doctor Who Peter Davison, and currently appears in lockdown comedy Staged with Michael Sheen.

The English actor, born in Aldershot, attended the Central School of Speech and Drama and was first noticed in his role as Tim in mockumentary sitcom The Office in 2001. He went on to play Bilbo Baggins in Peter Jackson’s The Hobbit film trilogy, Dr. John Watson in the British crime drama Sherlock (2010) and Lester Nygaard in the dark comedy-crime drama TV series Fargo (2014), as well as appearing as Arthur Dent in The Hitchhiker’s Guide to the Galaxy (2005). Once married to actress Amanda Abbington, Martin Freeman is a big fan of mod subculture and cites Paul Weller as one of his heroes.

Born Calvin Cordozar Broadus Jr., the American rapper and media personality first made his name on Dr. Dre’s debut solo single Deep Cover and album The Chronic, and has gone on to sell 35m of his own albums worldwide. With a background of drug dealing, pimping, firearms offences and being banned from Norway, in 2012, after a trip to Jamaica, he announced a conversion to Rastafarianism and released a reggae album as Snoop Lion. He has 17 Grammy nominations without a win. In 2018, Snoop announced that he was “a born-again Christian” and released his first gospel album Bible of Love. He’s now best known as the face of the Just Eat adverts.

Born in Illinois, actress Denise Richards grew up in the Chicago area until her family relocated to California when she was 15. She began working as a model, and moved to Los Angeles after High School, then landed parts in movies Starship Troopers (1997), Wild Things (1998) and Bond movie The World Is Not Enough (1999), playing nuclear scientist Dr Christmas Jones, a role which got her the vote as Worst Bond Girl of All Time. She has two daughters with Charlie Sheen to whom she was married for four years, and in 2011, Men’s Health ranked her at number 61 on their list of 100 Hottest Women of All Time. Currently she appears in The Real Housewives of Beverley Hills and does a lot of work for animal charities.

Best known for his comedy characters Ali G and Borat, Sacha Baron Cohen was born in London and educated at a private school, Haberdashers’ Aske’s Boys’ School in Hertfordshire, and at Christ’s College, Cambridge. On leaving university he worked as a model then a host on a satellite TV station, which got him roles on Channel 4 playing early versions of his comedy characters. His big hit on The 11 O’Clock Show was yoof icon Ali G, who got his own series Da Ali G Show (2000) and movie Ali G Indahouse (2002). Since then SBC has made two Borat movies, as well as Brüno (2009), The Dictator (2012), and The Brothers Grimsby (2016), each less funny than the last. He says: “Yes, some of my comedy – OK, probably half my comedy – has been absolutely juvenile… and the other half completely puerile.”

Sometimes we can’t quite remember why Amanda Holden is famous. While attending Mountview Theatre School in Wood Green, London, she appeared in 1991 at the age of 19 on Cilla Black’s Blind Date, but wasn’t chosen. But she soldiered on and got parts in EastEnders in 1994, then Kiss Me Kate, Smack the Pony, Cutting It and Wild At Heart.

But she was rather better known for her convoluted private life. She left her husband, comedian Les Dennis, after an affair with actor Neil Morrissey, and the regular appearances on the scandal pages marked the start of her irresistible rise to the top.

In 2006 she became one of the judges on Britain’s Got Talent, and is now a regular in TV documentaries, on the West End stage, on radio and on BGT, where her skimpy dresses are regularly designed to get the switchboards ringing.

Still sassy and sexy at 50, Amanda proves that it’s not what you’ve got that counts, but what you do with it.

So which of our pick of the celebrities born in 171 would you have guessed were 50 this year?

How To Brighten Up Your Home With New Flooring