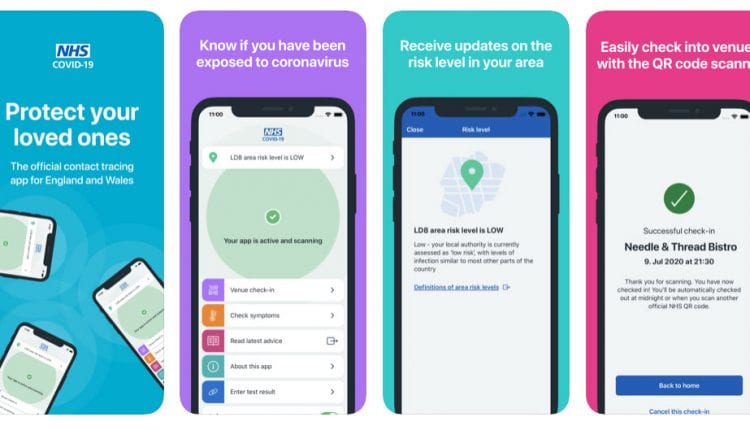 The NHS Covid-19 app has been relaunched today, September 24th, in England and Wales. The app alerts users if they have visited a venue which is found to be a coronavirus hotspot, and instructs users to self-isolate for 14 days if it detects that they have been close to someone who has informed the app that they have the virus.

Health Secretary Matt Hancock is advising anyone over 16 to download the app to their smartphone – it doesn’t work on tablets, smartwatches or other devices.

The app differs in technical functionality from a trial version which was tested with mixed success on the Isle of Wight but found to have difficulty detecting Apple iPhones. It is also being aimed at a younger age-group, from 16 upward rather than 18, reflecting concerns that students in further education colleges and universities may present a high risk of spreading infection. In Glasgow University, an outbreak in student accommodation has led to 124 students testing positive for coronavirus.

In Northern Ireland, an updated version of the StopCOVID NI app which accepts under-18s will be launched later this month.

Users of the app who self-isolate will will be entitled to the same support from their employer that they would receive if they were off work due to illness.

Critics worry that while the new app may have addressed privacy and security issues, it doesn’t solve the problem that there could be delays in booking tests.

The launch comes as the UK reported 6,178 coronavirus cases on Wednesday, up 1,252 since Tuesday, and 37 deaths.

Can You Catch Coronavirus Twice, and Can Dogs Sniff It Out?

The app can be downloaded from Android’s Google Play or Apple’s App Store – search for “NHS Covid-19”. Smartphones must have Android 6.0 (released in 2015) or iOS 13.5 (released in May 2020) and Bluetooth 4.0 or higher. That excludes the iPhone 6 and older versions of Apple’s handsets.

So far Apple users are rating the app at 2.8 out of 5, with comments including that it relies on users entering their postcode, and doesn’t seem possible to change your location to check other areas they might be visiting; that areas seem to be rated high or medium risk, but none low-risk; and that few venues are using the official NHS QR location codes.

Meanwhile it has been announced that UK government-funded ‘challenge trials’, where human subjects are deliberately infected with coronavirus to test the effectiveness of vaccines, are expected to begin in January.

Due for official announcement next week, the trials will take place at a secure quarantine facility in east London according to project insiders.

The intention is that the challenge trials will narrow the field of potential vaccines due to start full clinical trials next year.

Volunteers will be inoculated with a vaccine, and around a month later receive a “challenge” dose of Sars-Cov-2, the virus that causes Covid-19, under controlled conditions.

It has been reported that around 2,000 potential volunteers have signed up for challenge studies in the UK, mostly through a US-based advocacy group, 1Day Sooner, which campaigns for Covid-19 infection trials and has enlisted 37,000 people worldwide. 1Day Sooner is launching a UK campaign this week with a petition to parliament asking for public funding of a biocontainment facility with capacity to quarantine 100 to 200 participants.

Challenge trials have a been instrumental in developing vaccines and treatments for typhoid, cholera and malaria, and in understanding how the immune system responds to flu and other viruses. The history of the test model goes back to vaccination pioneer Edward Jenner, who in 1796 inoculated an eight-year-old with live cowpox virus in order to prove his theory of smallpox vaccination.

The report said: “The improvements in life expectancy at birth for males and females in the UK between 2016 to 2018 and 2017 to 2019, although lower than historical improvements prior to 2011, were the highest annual improvements for 5 years.

See here for more details of the The NHS Covid-19 app which has been relaunched today, September 24th, in England and Wales. The app alerts users if they have visited a venue which is found to be a coronavirus hotspot, and instructs users to self-isolate for 14 days if it detects that they have been close to someone who has informed the app that they have the virus.

See also: ‘Back to Home’ And Pub Curfews to Avoid Second Coronavirus Lockdown

Pubs in Central Scotland to Close – Will England Follow in Coronavirus…