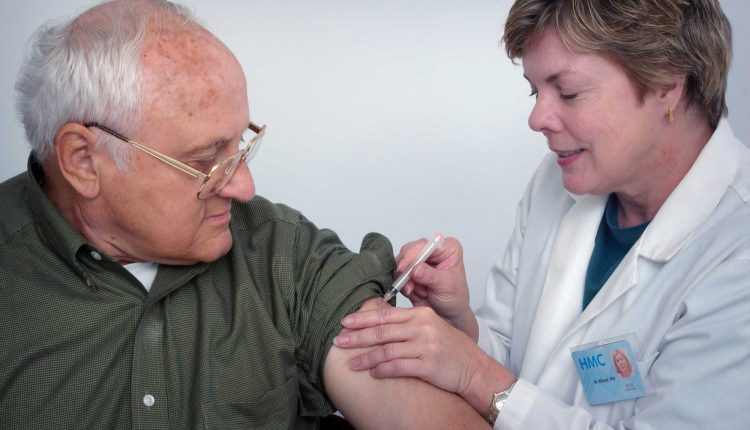 From November 11th it is compulsory for care home workers to have Covid-19 vaccinations, and the government has now announced that it will also become compulsory for frontline NHS workers from April.

Health Secretary Sajid Javid told MPs that he expected to set a deadline o the beginning of April for 103,000 unvaccinated NHS workers to get a first and second vaccination, in order to protect patients and the NHS as a whole.

But there have been concerns raised that this may cause some anti-vaxxers to leave the NHS, leaving it critically short-staffed at a crucial time.

Sajid Javid said that more than 93 percent of NHS frontline staff have had their first vaccination and 90 percent their second, a higher proportion than the general working-age population, where the percentage having had both doses stands at around 81.

It was made clear that NHS workers with a medical reason not to have a Covid vaccination, and those not in patient-facing roles, could be exempted, and that there would be no compulsion to have an influenza vaccination, which had been considered.

But Sajid Javid said the requirement for two Covid vaccinations would be enforced 12 weeks after Parliamentary approval was given, so likely to be from the start of April.

He went on to say that no unvaccinated worker should be “scapegoated or shamed”, and should instead be supported to make “a positive choice”.

Meanwhile, Thursday November 11th is the deadline for care home workers in England to get vaccinated, though Scotland and Wales have not made any proposals to make Covid jabs compulsory for NHS workers or care home staff, and in Northern Ireland there is to be a public consultation.

Chris Hopson, chief executive of NHS Providers which represents England’s NHS trusts, said: “We understand why people are vaccine-hesitant. We need to win the argument with them rather than beat them around the head.”

He said that there was a real possibility of losing staff, and that with 90,000 job vacancies and a reliance on staff working extra shifts, the NHS was already running on fine margins.

Critics say that while they appreciate the logic of protecting care home and NHS patients against Covid, if the vaccination programme causes staff to leave, more lives may be at risk. Some suggest the alternative of daily testing, pointing out that while the number of unvaccinated workers in the care home sector has fallen from 88,000 to 32,000 in a last month, this still left an substantial number of refusers.

Some countries have already introduced compulsory vaccination – in France, 3,000 unvaccinated healthcare workers were suspended in September.

Offical government figures show that more than 45.8 million people in the UK have had two doses of a Covid-19 vaccine, meaning that 79.8 percent of people aged over 12 are fully vaccinated, while 87.5 percent have had a first dose.

The number of daily confirmed cases of Covid-19 remains high, but Tuesday 9th November was the sixth day in a row that the figures were under 40,000, with 33,559 cases reported.

A further 262 deaths within 28 days of a positive test were reported, down from 293 for the same day last week.

10 million people in the UK have had a third ‘top-up’ vaccination, but about 30% of over-80s and 40% of over-50s in England have yet to do so. Sajid Javid said that people should get their booster jabs to avoid restrictions over Christmas, and that a further 3m invitations would be going out. Government figures show that 409,663 people in the UK received their third vaccine dose last Saturday.

Third ‘booster’ jabs are available in the UK to anyone aged 50 and over, front-line health and social care workers and over-16s with some health conditions. They can get it six months, or 182 days, after their second dose.

Sajid Javid called on young people to support older members of their families in getting the booster does, as well as flu vaccinations which should protect them through the winter. “We know vaccine immunity wanes over time, so boosters are vital in keeping you and your loved ones protected through the winter” he said. “And if you haven’t yet had your first and second vaccines, it is not too late,” he added. “The NHS will always be there to welcome you with open arms.

Dr Susan Hopkins, chief medical adviser for the UK Health Security Agency (UKHSA), told the BBC’s Andrew Marr Show that “the virus is circulating at very high levels in our community, so unless people get vaccinated, we will have a long and difficult winter”.

“We’re still seeing deaths in mainly the unvaccinated population… but increasingly, because of immune waning effects, there are deaths in the vaccinated group as well,” she said.

“It is particularly the older age groups, so the over 70s in particular, but also those who are clinically vulnerable, extremely vulnerable, and have underlying medical conditions. That’s why those people need to come forward for their third dose as soon as possible.”

The chief executive of NHS Providers, Chris Hopson, told Times Radio that bed occupancy levels in NHS hospitals were at “94, 95, 96%”, and added that

current hospital admission levels indicated that we were already into “peak winter. We’ve not seen that before. That’s unprecedented”. He added that the current situation was “very worrying” and “the NHS is going to be under real pressure”.

Is Liquid Skin the Answer to Wound Care?