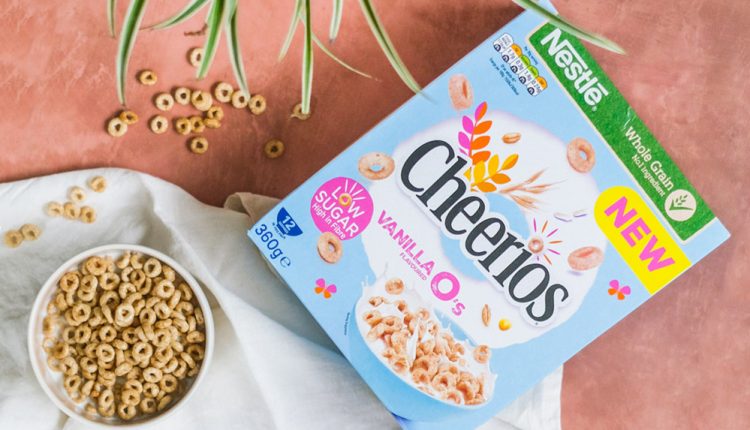 Nestlé Cereals has announced the launch of CHEERIOS® Vanilla O’s, a delicious new breakfast cereal containing less than 5% sugar and no compromise on taste.

The new low sugar, vanilla flavoured rings will offer consumers a nutritious breakfast option that is high in fibre, contains no artificial colours and flavours, and is fortified with vitamins and minerals. Tried and tested by consumers, research also shows that the latest flavour of wholesome little O’s is a hit with families.

CHEERIOS® Vanilla O’s is classified as non-HFSS (high in fat, salt or sugar) under new government regulations and has whole grain as the number one ingredient (86% whole grain). With the UK’s recommended average fibre intake for adults sitting at 30g per day, choosing breakfast cereals containing whole grain is an easy way to increase fibre intake.

The leading cereal maker also launched SHREDDIES® The Simple One earlier this year – a new addition to the SHREDDIES® range made from just four simple ingredients and containing less than 5% sugar. Both products mark the cereal giant’s commitment to offering options for health-conscious families to enjoy a tasty start to the day.

Toby Baker, Regional Marketing Director UKA – Nestlé Cereals, said: “It is our ambition to provide families with a nutritious start to the day, and the launch of CHEERIOS® Vanilla O’s further demonstrates our continued commitment to just that. This new addition to the well-loved family brand is not only non-HFSS, but also has whole grain as the number one ingredient and tasty enough for the kids (and parents) to finish the whole bowl!

“We know that consumers – and particularly families with children – are increasingly looking for low sugar, healthy breakfast options. With CHEERIOS® Vanilla O’s, retailers can cater to this growing demand and drive sales, while offering a delicious new breakfast cereal that doesn’t compromise on taste.”

CHEERIOS® Vanilla O’s will be available on shelves in Sainsbury’s from October 2021, with other retailers to follow soon.

Established in 1990, CPW is a long-standing partnership between Nestlé and General Mills, bringing together the world-class capabilities of both companies. Headquartered in Switzerland, CPW has a strong global network with 4,000 employees, 15 production facilities and sales teams in more than 130 markets.