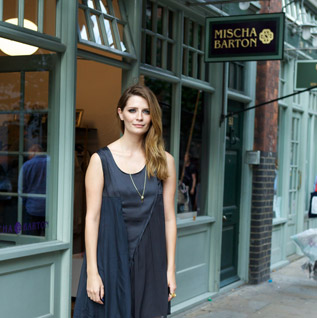 Nuala Barton, Mischa Barton’s mother, was in attendance and gushed with pride over her daughter’s wearable yet fashion-forward, vintage-inspired designs.

Mischa Barton, who had spent time during the day meeting with editors from leading global fashion magazines, including Vogue and Harpers Bazaar, surprised the crowd by joining talented musical artist Connan Mockasin and band in front of the microphone as they played to the glamorous crowd.

The flagship store launch follows the success of Mischa Barton’s handbag line which is now in its eighth season. The actress and fashion designer decided that Spitalfields in London would be the ideal place to house her extensive collections and that the store, which marries an art deco boutique-feel and her own distinctive Bohemian-style, the perfect space. Each collection represents a collaboration with her mother, Nuala Barton, with the primary focus being quality and functionality, infusing a colorful mixture of styles and inspirations.