Discover the delights of Mexican cuisine and be tempted to give it a go at home. Plus, read about the nation’s World Cup chances in Russia. 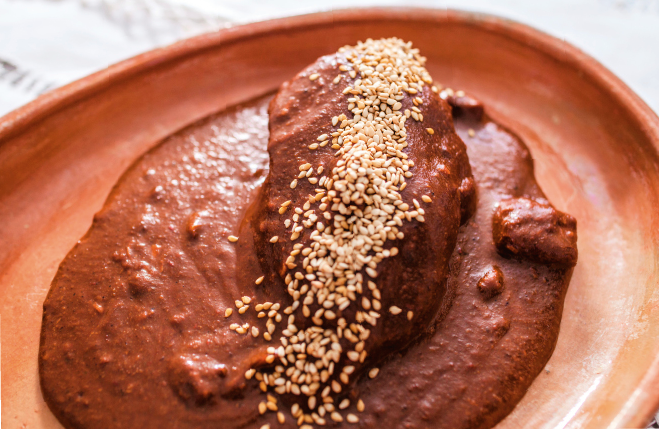 El Tricolor, Mexico’s national football team, is among the only three teams—including Brazil and Germany—to make it out of the group stages over the last six FIFA World Cup competitions. This year in Russia, they’ll be playing Germany, South Korea and Sweden in the initial group stages for a chance to better their best finish: reaching the quarterfinals.

In addition to corn and chilli peppers, other ingredients native to Mexican cuisine include tomatoes, squashes, avocado, cocoa and vanilla. Mole, a food staple, is a sauce made from sautéed onions and garlic, exotic spices, ground nuts and simmered with bittersweet chocolate. It makes a tasty topping for many dishes.

1. Season chicken. Heat 1 tbsp oil in a large skillet over a medium-high heat. Add chicken and cook, turning once, until browned on both sides. Transfer to a plate.

3. Lower heat to medium-low, return the chicken to the pan and coat with the sauce. Simmer until chicken is cooked through. Serve sprinkled with sesame seeds.