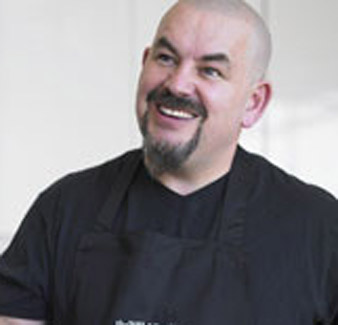 How did you come to enter MasterChef?
I was watching it and just looked up the website. Some of the early rounds are real car crash TV, so I thought I had a chance to make it through.

Were you nervous about taking your own dishes?
I was, I wanted to get through the invention round and have a chance to cook my first dishes, I didn’t think much beyond that. I wanted to go away after one or two rounds with them saying ‘You know what you’re doing, you’re pretty good’.

Did you ever think you would win?
No, even going to the finals I didn’t realistically think I was going to win it. Andy, who came second, is an extremely good cook and technically he’s better than me.

Did having no expectations help you relax?
Initially yes, I started doing the food I love. I remember John Torode telling me, ‘Cook what you love not what your head’s telling you – cook with your heart’.

What was the atmosphere like between you and the other contestants in the final?
We all got on really well and we still keep in touch. Winning meant far more to me beating someone as good as Andy than if I’d just walked it. I’ve got a very definite style, and I think that’s what did it. But everyone’s won in their own way – Andy’s working at a Michelin-starred Thai restaurant, I’ve got my restaurant in Dorset, The Wild Garlic and Chris is working in a very good gastropub.

Where did you find inspiration for your dishes?
I’m lucky, I’ve travelled a lot and that came through. We did a round which the judges didn’t like and it was because I was cooking bacon in maple syrup – go anywhere in the States and that’s what they love, but they didn’t love it!

Your dishes were always full of passion; is cooking one of the ways you convey your affection?
Absolutely, as a family we all love our food, it has a lot more importance than just fuel. Three or four years ago we never consciously sat down as a family, and now we do it two or three times a week, it’s great.

What was the toughest moment during the competition?
I just didn’t expect to get through any stage! There was one where we cooked for all the Michelin-starred chefs, with really difficult dishes that even their chefs struggled to do. So to give them to us as amateurs was a lot of pressure.

What was it like waiting for the series to air?
I went back to my corporate job as before, I had to put the show to the back of my mind for a few months because I wasn’t allowed to talk about it.

After the programme you had praise from some of the world’s top chefs, was it a whirlwind?
Yes it was, the offers I got were amazing. I knew as winner I’d be able to get into a good kitchen, but I’ve got a family and three kids, it’s not reasonable to expect them to take on a huge change in lifestyle. So we decided we would do it for ourselves and set up our own business. We found a really good restaurant, and a local investor who wanted to do it for the right reasons, and for whom their livelihood didn’t depend on our success. It’s still my restaurant and he’s happy, so it’s working really well.

Is the restaurant a family affair?
Yes, my wife gets involved and my eldest works there on a Saturday. When I had the corporate job the kids would see me disappear on a Monday and wouldn’t see me until Friday; they had no idea what I did. Now there’s a direct relation and they can see how dad earns a living, they come to the restaurant and eat, they love it.

Did you enjoy creating the menu?
Definitely; initially we used my dishes from MasterChef but it was actually the other more local dishes that were most popular. Now we write the menu twice a day depending on what’s fresh and available.

One of the things that came across in MasterChef is your love of fresh ingredients, do you think their provenance is important?
I do, I like my ingredients to be fresh, but for me it’s the flavour that’s most important. I’m not a great supermarket customer these days. If I can get it fresh then I’ll choose fresh, if I can’t I’m not going to get something that’s been in and out of a plane from Kenya to get a few green beans on the table, I’d rather go without.

Are there any chefs that have particularly inspired or mentored you?
Not particularly mentored, but inspired – Rick Stein is a huge hero, I started learning to cook through a day course at his cookery school. His style and what he’s about is very much a touchstone for us at the restaurant. And Raymond Blanc’s classic French simple dishes are great to apply to British cooking.

What does Christmas mean to you and your family?
Growing up my family wasn’t close, so for me it’s really important to have the kids around me and spend that time together for a family Christmas.

What will you be eating this year?
Pretty much the recipes that I’ve given for the magazine – they are new creations and old favourites. The bread pudding is Christmassy because it’s got a bit of ginger in it, but it’s a lighter alternative. Goose is traditional, the seafood platter is almost a bit of New Zealand; it’s just my sort of food.

Christmas Day can be quite a stressful time for the designated cook, do you have any tips on how to cope?
It doesn’t need to be stressful, if you do most of the prep in advance and don’t over-fuss it. People want to see the person who’s cooking, so a roast and a few simple canapés like we’ve done here will work perfectly.

What are your future aspirations?
We want to get the restaurant right; we can earn a reasonably comfortable living so we’re focused on doing that for now.

Do you feel like an accomplished chef?
No, not at all, I’ve still got a huge amount to learn. We are experimental in my kitchen, we change dishes all the time and we don’t always get it right. It has been hard starting a kitchen off straight away – I’d love to have had a couple of years in a professional kitchen to learn, but I have the opportunity now so I have to get on and do it.

The perfect cup of coffee? It’s easier than you think