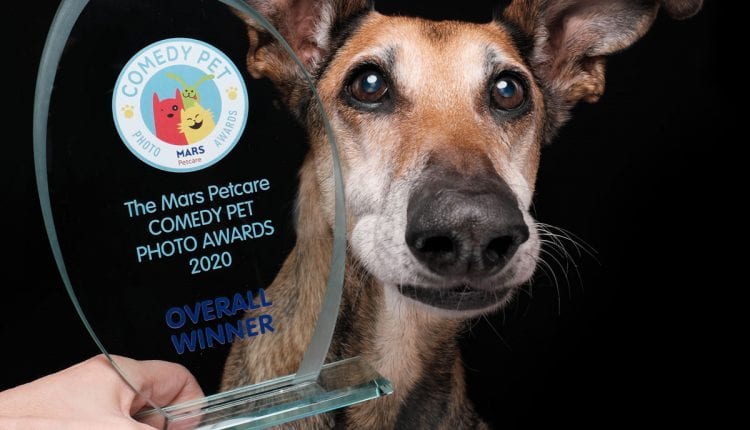 The winners of the Mars Petcare Comedy Pet Photo Awards 2020 have been announced. The competition aims to raise awareness of homeless pets in the UK and raise money for charity partner Blue Cross.

Overall winner is Elke Vogelsang with her funny pic of Noodles entitled:
Guard Dog on Duty.

Over the summer, the Mars Petcare Comedy Pet Photo Awards called on all pet and animal lovers to submit hilarious images of their funny furry friends for a chance of winning £3,000 and with the added bonus of raising money for the Blue Cross pet charity. Noodles was a clear favourite with the judges and also won the Dog category award.

When hearing the news Elke Vogelsang said: “It’s wonderful to be associated with something that makes people happy. This dog definitely is a mood-lifter. Happy to share her funny, gorgeous face with the world.”

The Mars Petcare Comedy Pet Photography Awards doesn’t only showcase the incredibly positive impact that pets have on our lives, it also aims to raise awareness around homeless pets in the UK, a message that is at the heart of competition sponsor’s Mars Petcare and their mission of “Ending Pet Homelessness.”

Consequently, this mission is also close to Elke’s heart with her dog Noodles (a Galgo Espanol mix breed) found in a kill shelter in Spain where she had been abandoned at the end of the hunting season. Elke was determined to rescue her and ‘fell in love with her gorgeous face and funny ears immediately.’ Now living in Germany, Noodles is a very important member of the Vogelsang family, along with two other rescue dogs. Elke explained:

“Our dogs are not only pets, but also family members, muses, friends. Ten years ago, the dogs (Noodles and my other girl Scout) alerted me that something was wrong by barking and howling. They ran straight to the bathroom door, where I found my husband unconscious in the bath. The diagnosis was a severe brain haemorrhage due to a ruptured aneurysm. If it hadn’t been for the dogs, I would have found him too late. Thanks to them and great doctors he survived, but during the stressful months that followed, I found photography as a creative outlet.

“Hurrah to two Spanish mutts, once abandoned and sentenced to death, then rescued and adopted, now life-savers themselves. We are forever grateful to have them in our lives. I hope I can give them back at least a tiny bit of what they give us.”

In a fitting conclusion to the 2020 Awards, Elke plans to reinvest some of the prize money back into an organisation for pet rescue. By entering the competition this year and celebrating her wonderful pet with her funny, adorable antics, Elke has enabled Noodles to – unwittingly – help out those animals who are less fortunate than her.

• Cat Category: Malgorzata Russell’s brilliant photo of Basil, peeking from under a fence titled ‘Why are you upside down, Mum?’
• Mighty Horse Category: Magdalena Strakova with her great shot of three horses ‘Gossip Girls’
• All Other Creatures: ‘Drama Queen’ by Anne Linder took the prize with her yawning rabbit
• Pets Who Look Most Like Their Owner’s Category: ‘Morning Mood’ a photo by Hannah Seeger and her dog
• Junior Category: Ayden Brooks for his sleepy cat called ‘Fox Mulder’.

The photography competition is now in its second year and was created by the founders of the world-famous Comedy Wildlife Photography Awards, Paul Joynson-Hicks and Tom Sullam.

At a time when most of the nation was spending more time with their pets than ever, the competition saw pet lovers across the world capturing the funniest moments with their much-loved pets.

The partnership is also raising much needed funds for pet welfare by donating 10 percent of the sponsorship fee and 10 percent of all entry fees to national pet charity Blue Cross, to help with its work rehoming pets and providing veterinary treatment and care.

Helen Warren Piper, General Manager at Mars Petcare UK says: “Celebrating our pets is central to our business, and this competition has been hugely enjoyable to be a part of. The benefits of having a pet in the home have never been clearer, and we have loved seeing so many pet lovers sharing their amazing images. We’re delighted to be partnering with Blue Cross and in addition to the funds we are raising, we hope the competition will raise much needed awareness for homeless pets in the UK.”

Tom Sullam, Comedy Pet Photo Awards, adds: “I think it’s fair to say that most people can’t see the end of 2020 fast enough! 2021 will hopefully bring some good news, some cheer and positive horizons for everyone – but in all the gloom of 2020 the Comedy Pet Awards managed to raise our spirits more than most things. The importance of pets in our lives – the positive life affirming friendship that they bring without even realising it – is often underestimated and taken for granted. But this year has really given these pets a chance to shine and I think without pets many, many people would have had a harder time dealing with the isolation. Thank you to the pets, all of them, for making us smile through this competition, and keeping many of us on an even keel!’

Tracy Genever, Judge, and Blue Cross Head of Education concludes: “We know the massive impact pets can have on our well-being and this joy and companionship is clear to see in all these pictures. I’m thrilled to be invited to join the finalist judging panel and can’t thank The Mars Petcare Comedy Pet Photo Awards enough for choosing Blue Cross to support this year.”

If you love the pictures and want to join The Mars Petcare Comedy Pet Photo Awards in helping Blue Cross, you can donate here: bluecross.org.uk/marscomedy-donate.

The new competition kicks off in the spring next year, so why not keep your funny pet photos safe and enter them in the 2021 Awards. For further information on the Mars Petcare Comedy Pet Photo Awards and to enter next year please visit: www.comedypetphoto.com

Are There Murder Hornets in Your Garden?