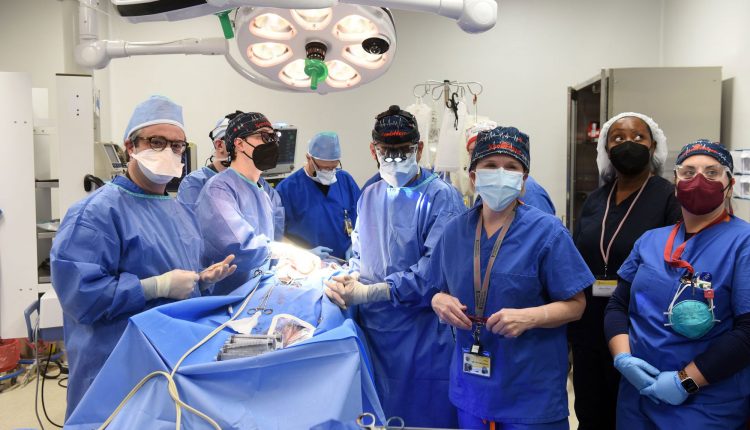 An American man aged 57 has become the first patient in history to receive a heart transplanted from a pig.

David Bennett is reported to be doing well three days after the operation. He was said to be too ill to qualify for a human heart transplant.

The experimental seven-hour procedure which took place in Baltimore was regarded as the last chance to save Mr Bennett’s life, though his doctors admit that they cannot guarantee his long-term survival.

“It was either die or do this transplant,” Mr Bennett was quoted as saying a day before the surgery. “I know it’s a shot in the dark, but it’s my last choice,” he said.

The medical team at the University of Maryland Medical Center sought special dispensation by the US medical regulator for the procedure on the basis that the patient would have died without it and was ineligible for a human transplant.

The operation is the culmination of years of research into the possibility of using animal organs in human transplants to solve the problem of organ shortages. Surgeon Bartley Griffith said that the technique would bring the world “one step closer to solving the organ shortage crisis”. Currently, 17 people a day in the US die while waiting for a transplant, with more than 100,000 reportedly on the waiting list.

It’s already common to use pig heart valves in transplantation, but this is the first time an entire heart has been used. Xenotransplantation, as it is know, faces formidable medical problems; apart from the usual problem of organ rejection, there is the fact that pig organs, though close in genetic structure to human, are not identical. to solve this problem, researchers have been experimenting with genetically modified animals, and the donor animal in this case was a GM pig.

Why Do You Need To Monitor Your Heart Health?

Listen to Your Heart: Your Guide to Heart Health

The news follows reports from October 2021 that surgeons in New York had successfully transplanted a pig’s kidney into a person, at the time the most advanced experiment in xenotransplantation, though that patient was brain dead and had no hope of recovery.

In David Bennett’s case, his diagnosis of terminal heart disease made him eligible for the xenotransplantation experiment, as he was bedridden and being kept alive by support machines. “I look forward to getting out of bed after I recover,” he said last week. On Monday, he was reported to be breathing on his own while being carefully monitored.

Doctors admit that the long-term outcome is unknown. The transplanted organ came from a pig that had been genetically modified to knock out certain genes which could have caused organ rejection, but the long-term results are difficult to predict, with Mr Bennett’s son telling the Associated Press that the family were “in the unknown at this point”. He added: “He realises the magnitude of what was done and he really realises the importance of it.”

“We’ve never done this in a human and I like to think that we have given him a better option than what continuing his therapy would have been,” said Bartley Griffith. “But whether [he will live for] a day, week, month, year, I don’t know.”

Pig organs are a good match for people when it comes to size, and genetic modification holds out the promise of various organs such as kidneys, lungs and livers being used. In the kidney transplantation experiment, surgeons connected the donor pig kidney to the blood vessels of the brain-dead recipient to see if it would function normally once plumbed in, or be rejected. they reported that it functioned normally, and did not seem to be rejected. Part of the pig’s thymus gland was also transplanted, on the theory that it would help remove stray immune cells that might fight the pig tissue.

The surgeon in that case, Dr Robert Montgomery, is a heart transplant recipient himself. While acknowledging that his work is controversial, he says that there is an urgent need to find more organs for people on waiting lists. “The traditional paradigm that someone has to die for someone else to live is never going to keep up” he said. “I certainly understand the concern and what I would say is that currently about 40% of patients who are waiting for a transplant die before they receive one.

“We use pigs as a source of food, we use pigs for medicinal uses – for valves, for medication. I think it’s not that different.”

While experimental, he said that research “gives us, I think, new confidence that it’s going to be all right to move this into the clinic.”

David Bennett survived for two months following his surgery, but his condition began to deteriorate and the 57-year-old died on 8th March.

It was reported that Mr Bennett knew the risks attached to the surgery, acknowledging before the procedure that it was “a shot in the dark”.

Doctors at the University of Maryland Medical Center, Baltimore, had been granted a special dispensation by the US medical regulator to carry out the procedure, on the basis that Mr Bennett – who was ineligible for a human transplant – would otherwise have died.

He had been bedridden for six weeks leading up to the surgery, with a life support machine keeping him alive.