Lemon and Amaretti Trifle is the Official Platinum Jubilee Pudding 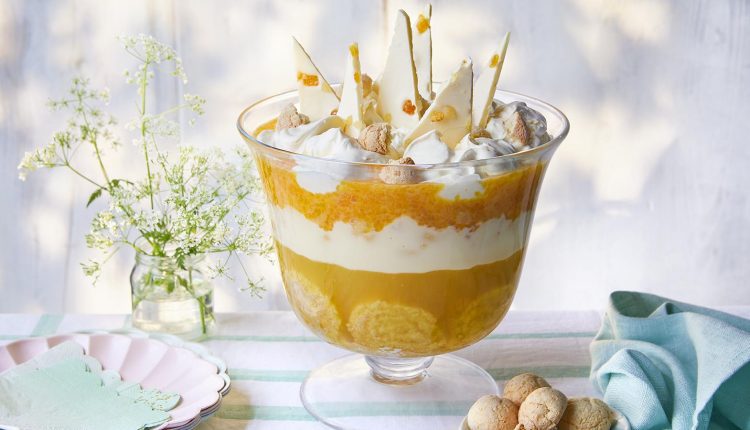 A lemon and Swiss roll amaretti trifle by Jemma Melvin is to be the official pudding for the Queen’s Platinum Jubilee. The dessert was inspired by the lemon posset served at the Queen’s wedding to Prince Philip, and is made with layers of lemon curd swiss roll, custard, jelly, a mandarin coulis, and amaretti biscuits.

In the tradition of dishes inspired by royalty including Coronation Chicken and Victoria Sponge, the trifle was the winner of a competition which had 5,000 entries. The five finalists competed in a final which was televised on BBC1.

Jemma Melvin, a copywriter from Southport, Merseyside, was up against fellow amateur bakers Kathryn MacLennan, Sam Smith, Shabnam Russo and Susan Gardner in The Jubilee Pudding: 70 Years in the Baking, with the winner announced by the Duchess of Cornwall. The competition was run by royal grocer Fortnum and Mason in partnership with the Big Jubilee Lunch Charity.

The recipes in the final included a passionfruit tart, a bundt cake, a rose falooda cake and a ‘four nations’ pudding.

The bundt cake was based on a Victoria sponge with the addition of the Queen’s favourite aperitif, Dubonnet, while the four nations pudding included Scottish berries, Yorkshire rhubarb, Welsh cakes and Irish butter and cream.

You can find all the finalists’ recipes here:

Jemma said her gran had taught her to bake but the trifle was her nan’s signature dish. Asked how she felt about the trifle’s triumph, she said: “I cannot believe it. Everything I was up against was the most beautiful desserts and puddings with beautiful stories. So that this quite humble trifle has won is quite surreal.”

For the Swiss rolls

For the lemon curd

For the St Clement’s jelly

For the amaretti biscuits

For the chunky mandarin coulis

For the jewelled chocolate bark

As a shortcut for this recipe, you can use ready-made versions for most of the components and just make the Swiss rolls and mandarin coulis from scratch. For the lemon curd, use 300g/10½oz ready-made lemon curd. Instead of the St Clement’s jelly, use 1 packet of lemon-flavoured jelly and follow the packet instructions to make 568ml/1 pint. For the custard, use 500ml/18fl oz ready-made custard. For the biscuits, use 100g/3½oz ready-made amaretti biscuits.

Instead of making the jewelled chocolate bark, you can finish this trifle by scattering over the reserved amaretti biscuits, mixed peel and 50g/1¾oz white chocolate chunks.

Thinking of Selling? Improve Your Prospects with ‘Staging’