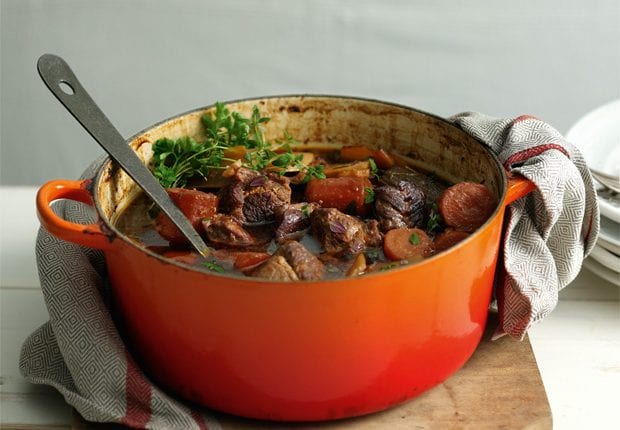 2. Pour the olive oil into a large frying pan and set to heat through well.

3. Meanwhile, heat the butter in a large, heavy casserole dish. Add in the onion and garlic to the butter and fry gently, stirring often, to bring out the onion’s natural sweetness.

4. As the onion softens, add the lamb chunks to the hot olive oil in the frying pan, placing them in one layer in the pan, and fry until brown, checking them every so often.

5. Now add the flour to the softened onions, stirring in vigorously with a wooden spoon.

6. Add in the tomato puree, mixing in well and fry, stirring, for 1–2 minutes.

7. Add in around a quarter of the water, mixing it in to dissolve the roux. Continue adding the water in 4–5 stages, mixing well between each addition. After all, you don’t want it to be lumpy.

8. Now add in the lamb stock cubes, crumbling them in. Add a touch of gravy browning if using and stir in. Stir until the cubes have dissolved and simmer gently.

9. Meanwhile, after the lamb has been frying for around 5–6 minutes, turn the pieces over and fry for a further 5–6 minutes until golden brown on both sides.

10. Add the carrot and celery to the simmering Knorr Lamb Stock. Add in the browned lamb to the stock, fitting it snugly into the casserole dish, then the bay leaves and thyme.

11. Cut the potatoes in half, then slice into 5mm-thick slices. Place the potato slices in a bowl and toss with the clarified butter or butter and olive oil mixture until coated.

12. Layer the potato slices, overlapping them as you do so, on top of the lamb. The natural starch within the potatoes helps them stick together.

13. Cover the casserole dish and bring the mixture to the boil.

Want to buy a property in the UK? Here are our top locations!

Summer Tomato and Lentil Salad for a Tasty Cooling Treat