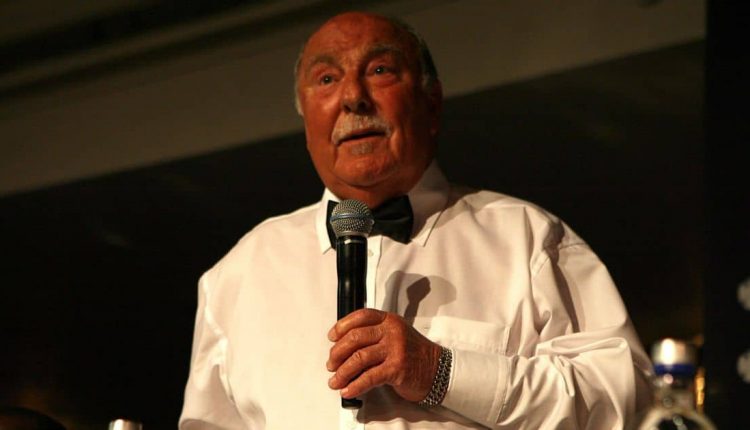 Tottenham, Chelsea and England icon Jimmy Greaves, considered as one of the finest goal scorers English football has ever produced, has died at the age of 81.

Tottenham Hotspur announced that their all-time record goal-scorer had passed away at his home during the early hours of Sunday morning. The 1966 World Cup winner had been in poor health since he suffered a stroke in May 2015, which left him wheelchair-bound and with impaired speech.

A statement from the club stated: “We are extremely saddened to learn of the passing of the great Jimmy Greaves, not just Tottenham Hotspur’s record goalscorer but the finest marksman this country has ever seen.

“Jimmy passed away at home in the early hours of this morning, aged 81.”

A message was also posted to Greaves’ Twitter account. It read: ‘Rest in peace Jim. The greatest English goal scorer that ever lived. We will miss you always and remember the incredible fun we had for twenty years during our theatre shows.’

Nicknamed ‘Greavsie’, he was one of the greatest strikers to play the English game. Born in Newham, East London, he kicked off his career with Chelsea following being scouted by the club, before playing for AC Milan, Spurs and West Ham. During his time at those clubs, he scored a total of 447 goals, with 266 of those coming for Tottenham in 379 games. He also holds the record for the most goals in English’s top flight with 357. In 1960-61, Greaves scored 41 goals in a single season for Chelsea, and in 1962-63, he scored 37 goals for Tottenham, with both still remaining as club records today.

He also won a number of trophies in his club career including two FA Cups with Tottenham Hotspur and an Italian title with AC Milan.

Greaves was also a prolific goal scorer for England, scoring 44 goals in 57 appearances for the national team, leaving him fourth on the list of all-time England goalscorers. Because of his goalscoring record, he was a part of the famous 1996 World Cup winning England squad. He was called up to Sir Alf Ramsey’s squad, however, was injured during the group stages of the competition and was replaced by Sir Geoff Hurst, who retained his place for the rest of the World Cup.

After his retirement in 1971, Greaves battled with alcoholism, but tributes were paid to his recovery from addiction, and his resurgence when he went into broadcasting, presenting shows such as Saint and Greavsie alongside former Liverpool striker Ian St John, between 1985 and 1992.

Greaves’ health began to worsen in 2012 when he suffered from a mild stroke in February, before a more severe stroke occurred in 2015.

His achievements were recognised in 2020 as he was awarded an MBE for his services to football.

Greaves leaves behind his wife Irene and his four children, 10 grandchildren and great-grandchildren.

Tributes to Greaves have been flooding in from the footballing world, recognising his talent and records.

Before their Premier League game on Sunday Afternoon, both Tottenham and Chelsea paid their tributes to Greaves. A minute’s applause was held before kick-off in his memory, while a host of Tottenham legends and ex-teammates lined up on the side, which included Martin Chivers, Steve Perryman, Micky Hazard, Paul Allen, Ossie Ardiles, Gary Mabbutt, Graham Roberts, Glenn Hoddle, Ledley King and Michael Dawson. In addition, both sets of players wore black armbands.

There were also minute’s applauses accorded before the two other Sunday Premier League games – West Ham vs Manchester Utd and Brighton vs Leicester.

A statement from Chelsea read: “Chelsea Football Club mourns the loss of a truly remarkable player and one of our own. Our thoughts and sympathies are with Jimmy Greaves’ family and friends at this time of their sad loss.”

Another one of his former clubs, AC Milan, also paid tribute on Twitter.

“We are deeply saddened to learn of the passing of our former player Jimmy Greaves. Our hearts go out to his friends and loved ones on this day of mourning.

“Although our time together was short, we’ll forever cherish the memories. Farewell, Jimmy.”

Current Tottenham striker, Harry Kane, who is second behind Greaves on Tottenham’s goalscorers list said he was a “true legend” of the game.

Former Tottenham striker and presenter, Gary Lineker, mentions Greaves as a “giant of the sport”

“Quite possibly the greatest striker this country has ever produced. A truly magnificent footballer who was at home both in the box and on the box. A charismatic, knowledgeable, witty and warm man,” he said.

England Manager, Gareth Southgate described Greaves as “someone who as admired by all who love football, regardless of club allegiances.”