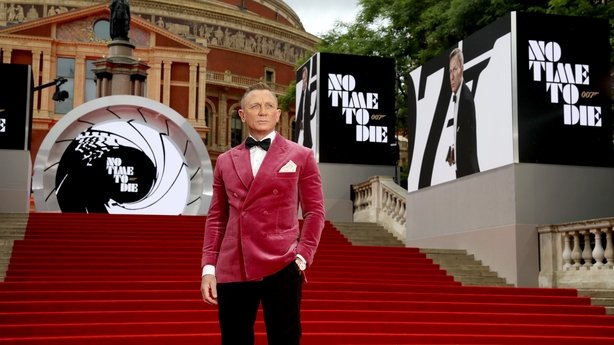 Daniel Craig’s final film as James Bond, No Time To Die, finally premiered in London, 18 months later than planned due to the COVID-19 pandemic.

It is cinema’s most high-profile red carpet since the beginning of the pandemic, with the guest list for the world premiere including members of the Royal Family and Oscar-award winners.

No Time To Die, the 25th James Bond film, will be Daniel Craig’s fifth and last appearance as 007.

Speaking to BBC Radio 5 Live on the red carpet, Craig said the role as Bond was “incredibly important to cinema and to history, and the weight of that has been on my shoulders for a while”.

“I’ve been incredibly lucky,” he continued.

The 53-year-old arrived at the premiere, at the Royal Albert Hall, in a dark pink suede dinner jacket which covered a smart white shirt and a black bow tie.

Craig, on stage, also expressed his gratitude to the front-line workers who have worked tirelessly throughout the pandemic, with several healthcare workers invited to the screening.

“A lot of front-line line workers here. [It’s] an honor for us — we’d like to dedicate this film to you this evening.”

As well as the like of The Duke and Duchess of Cambridge and the Prince of Wales and Duchess of Cornwall, there were also various other familiar faces on a glitzy and star-studded red carpet.

Other members of the cast such as Rami Malek, Naomie Harris, Lashana Lynch and Les Seydoux featured.

Naomie Harris, who for the third time running is playing the role of Miss Moneypenny said it was “an emotional night”.

Lashana Lynch, who has recently joined the cast playing the role of secret agent Nomi, said that the addition of her character indicates a step forward for the franchise.

“I like to watch cinema that really makes me feel as though I’m included, that my narratives are being told,” she said.

“The women that I was raised with and the women that I continue to love, and respect are people like Nomi. The fact that she was even an idea on the page is reflective of the world that I see, how I see it through my black eyes, and I just feel really proud to be able to add my culture to such a beautiful and rich franchise.”

Director of the film, Cary Joji Fukunaga expressed his excitement for the films release.

“We have all missed the experience of going to the cinema not just for the story but also to be thrilled,” Fukunaga said onstage. “I am thrilled to be sharing the 25th James Bond the way it was meant to be seen: on the big screen.”

There were also many well-known celebrities that were at the event. Recently crowned US Open champion, Emma Raducanu, put her tennis practice aside to attend the premiere which was also attended by the like of US singer Billie Eilish, UK rappers Stormzy, Dave and Skepta, former Bond actress Dame Judi Dench and German composer Hans Zimmer.

The majority within the film industry will be looking closely at successful the latest Bond film will do at the box office and whether the film can entice fans to return to the cinemas in large numbers.

According to cinema chains Cineworld and Odeon, advance ticket sales in Britain have been at levels that have not been witnessed since the beginning of the pandemic, where cinemas had shut.

Odeon state that they sold in excess of 175,000 tickets by Monday, while Cineworld state that it had seen the highest pre-booking rates since the release of Avengers: Endgame in 2019.

The film has already received rave reviews from many of the leading national outlets. Reviewer Kevin Maher, from The Times, awarded the film five stars saying No Time To Die is “magnificent” and delivered as much as Craig’s first appearance as 007 in Casino Royal released in 2006.

The film will be available to watch in cinemas from Thursday.

SEE ALSO: Who Were the Big Winners at the 2021 Emmy Awards?