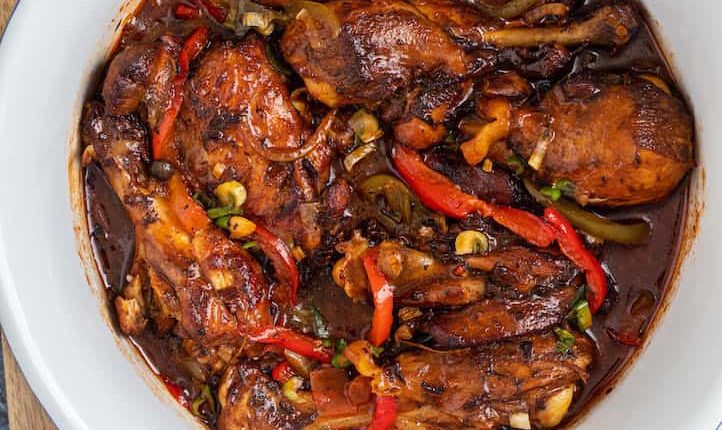 Jamaica Independence Day is celebrated on August 6th annually. This day became a national celebration in 1962 when Jamaica became independent with full dominion status in the Commonwealth, under a constitution that retained the British monarch as head of state. The first elected Prime Minister was Alexander Bustamante. To celebrate, let’s enjoy this authentic Jamaican Brown Stew Chicken recipe from Jamaican Foods and Recipes.

If you love chicken you will love this authentic Jamaican brown stew chicken recipe. The chicken is lightly fried, then braised down in a nice savoury sauce, which you can pour over your rice or whatever you are serving with this chicken dish. Packed with flavour from traditional spices, this mouthwatering dish will be a favourite with the whole family.

Just like Jamaican curry chicken, the chicken is de-skinned, washed with lime and chopped into small pieces, seasoned and cooked down in a tasty sauce.

If instead, you used brown sugar to brown the chicken and the stew tasted bitter, it is because you burnt the sugar for too long before adding the chicken.

Follow the recipe below, and you won’t have a problem getting your Jamaican stew chicken tasting great.

In a nutshell, brown stew chicken is made by browning chicken pieces, then braising them in a savoury sauce with vegetables thickened with ketchup.

Chicken basically goes with anything, whether it is fried or brown stew. What you serve brown stew chicken with depends on the day you are serving it. If having it for Sunday dinner, you might serve it with rice and peas. Any other day serve it with any other rice dish.