Is All Caviar Farmed? 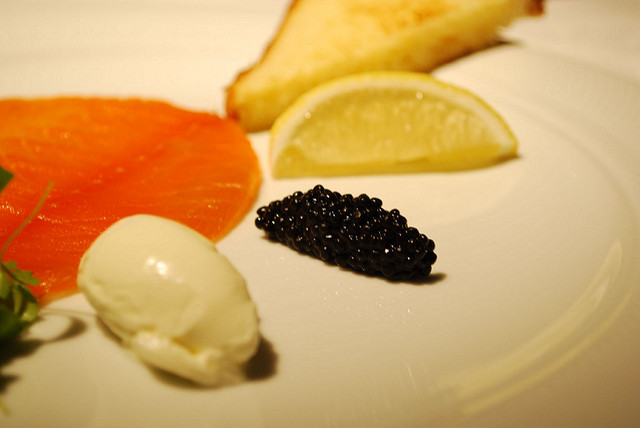 Although many people still firmly associate caviar with Russia, Iran and the Caspian Sea, the reality today is very different.

Some 20 years ago, restrictions were loosened on fishing for wild sturgeon in the Caspian Sea. At much the same time, many of the countries around the Caspian were becoming more industrialised, particularly with the expansion of the oil and gas industry in the region. The subsequent over-fishing, pollution and modification of rivers had a catastrophic effect on the wild sturgeon population.

At the start of this time, caviar prices fell dramatically due to the increased supply, but this did not last long. Prices soon rose to exorbitant levels as the sturgeon became scarce, and quality declined as fishermen harvested what they could rather than what they should.

In 2009, the export of wild sourced caviar from the Caspian region was prohibited under the Convention on International Trade in Endangered Species (CITES). This means that all caviar on sale in the UK should be from farmed sturgeon and CITES registered to prove the fact. Every tin or jar should have a security seal and carry a CITES number.

Fortunately for caviar dealers and consumers, the sturgeon farming industry was already up and running well before the Caspian Sea supply problems and subsequent ban on wild caviar. Sturgeon was being farmed in parts of Europe as far back as the 1970s. The initial aim was to produce fish for the sport fishing market, with some meat production. More focus was applied to caviar production as prices rose and supplies dwindled. The rising prices attracted the attention of others and the sturgeon and caviar-farming industry began developing in earnest across the world.

Today, we can source caviar from many European countries as well as further afield. There are farms in Canada, USA, Uruguay, Israel, Iran, Dubai, South Korea and, of course, China.

Farming caviar is far from a get-rich-quick operation. Sturgeons are generally large fish and are slow to mature. The Siberian sturgeon (Baerii) is widely used by the farming industry as it produces very good caviar and matures in only seven to eight years. Other species will take longer with the mighty Beluga (Huso Huso) taking 18-20 to mature.

However, it is possible for a new farm to produce caviar much quicker than that. Mature sturgeon can be bought and then imported to be processed on the farm. This is not entirely ethical as it merely side-steps caviar laws.

Sturgeon farms can be outdoors or indoors, with water flowing through the farm or circulated. In outdoor farms untreated water is able to flow through the fish ponds, creating a more natural environment for the fish, and therefore more likely to produce caviar more akin to wild caviar than a highly controlled, industrialised, indoor operation.

Producing top quality farmed caviar is no simple task. The fish need to be from the right stock, the water quality and temperature need to be perfect and the feed must be the best quality. Sturgeon can store the flavours of their environment in their eggs. Hence an indoor farm with a poor treatment system in its circulated water may produce caviar with a hint of ammonia. An outdoor farm with dirty ponds may produce caviar that tastes of mud. If the water is too warm, the caviar can be mushy.

The farming of sturgeon has brought many advantages to the caviar industry. No longer do we just think of Beluga, Oscietra and Sevruga as the three types of caviar. There are a whole range of species being farmed, plus a bewildering array of hybrid sturgeon. China has its own sturgeon species on which its industry is based.

As the industry has developed, so supply has increased and prices have come down. Caviar is now more affordable than it has been for about 30 years so more people are able to enjoy more of this fantastic delicacy.

Is it Time to Update Your Kitchenware?

Get the Right Ice for Your Christmas Party