Vivek Singh, Indian chef and founder of London’s revered Cinnamon Club, is at the forefront of modern Indian cuisine. His hefty career has seen the release of five cookbooks and a regular guest slot on BBC’s Saturday Kitchen 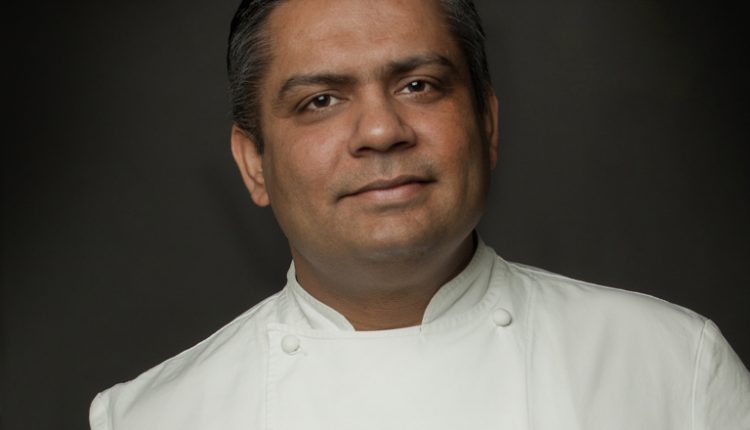 Q. Tell us a bit about your new book, Indian Festival Feasts…

VS: When I think of food—very often—and I’m looking for inspiration, I’m looking for what dishes to put on, I’m drawn to a food memory or a journey or an instance that I may have had. Very frequently the dishes and the meals that I most fondly remember happen to be around some kind of celebration or the other. When I thought a bit deeply about it, I realised that these celebrations—religious or social or not—things like weddings, festivals like Holi, Diwali, Dussehra, Eid for that matter…I remember us getting invited to a feast at my neighbour’s [house] and there was so much meat and so many different things. It was an absolute dream come true. As a child growing up normally you were consuming meat once a week, sometimes once in two weeks. To go to a feast or to an event where everything was meat, all different kinds of delectable kebabs and curries, fragrant biryanis…just stuck in my memory. So the idea for the book had been going for some time but when publishers got in touch and said, ‘You’ve done restaurant books, you’ve done modern Indian cooking and all that stuff…do you want to dig a bit deeper?’. So we talked about it, and I started to research. Because then you really start looking; in India we have as many festivals as there are number of days. Even any particular festival, say for example Vaisakhi, which is a harvest festival around the Punjab, it’s celebrated in so many different ways in so many different parts of the country, so many different kinds of food…so we kind of start with the main ones. We’ve got about 12 main festivals, working through the calendar.

Q. You’ve mentioned that you researched a lot of festivals for the book—which ones were your favourites?

VS: My favourite is Holi by far. The festival of colour, it’s an absolute joy, it’s partly because it doesn’t involve any pujas, three-hour long venerations, or fasting or abstinence, long drawn-out rituals—none of that stuff. This is just about having pure fun, it breaks down barriers, it’s inclusive, it’s about playing pranks with each other, it’s about celebrating friendships, forgetting about the past and looking ahead with optimism and hope. It’s my favourite festival and of course it’s the one festival which has got no rules. In fact, the only rule about Holi is that there are no rules. It’s just a great party, my favourite festival by far.

VS: Absolutely, we don’t have an awful lot of—in terms of celebrating or expressing oneself—we don’t have that much formality. We have lots of rules and regulations around worship and a lot of festivals involve some sort of religious act, performing of a veneration or ritual, but that’s the formal part of it—the one that probably only the lead members of the family are involved in. But then the other wider expression, very often, is around getting people together and feeding people. Feeding people is an obsession we have, whether it’s a wedding (where it’s not unheard of to invite 1,200 people to a meal), or having hundreds of people gathered together…it’s food, food, food everywhere. I think in a society that doesn’t have that many means of expression, I think food has always remained at the centre of that expression. You asked me what’s my favourite festival—one was Holi. The other is not a festival really but it’s a period between Dussehra and Durga Puja. There’s a two-week period in-between, in Bengal—it’s called Bijoya, Bijoya meaning ‘the victory’. That two-week period is celebrated as an extended Christmas. It’s festival season at its peak in India, it’s generally a lot of fun.

Q. How would you say the food served at festivals differs from the everyday food had at home?

VS: It’s certainly more celebratory; a bit more effort goes into it in terms of the range of dishes on offer. It’s not just about meat. In fact, there are lots of festivals that do not involve any meat whatsoever—things like Pongal, things like Navratri, they are purely vegetarian.

Q. Have you put any of your favourite childhood dishes in the book?

VS: Oh lots, there’s loads. In the Bengali wedding chapter there is a pot Malay curry which is probably one of my earliest food memories, I must have been seven or eight or something like that. I still am very fond of it, in fact I’m so fond of it I don’t put it on the restaurant menu all the time, I put it on for a few weeks and then I take it off…if you see it everyday it’s pedestrianised. Things like that. There are lots of chaats and stuff like that. In fact, my mother’s recipe for Malpua, which is one of the most traditional…kind of an Indian pancake that is traditionally made and served at Holi…there’s lots of recipes like that. In fact for the first time ever, in the Pongal chapter, I’ve put in a dish that I’ve never really written a recipe of before, it’s one of those things that my dad used to make at Pongal.

Q. You’ve released quite a few cookbooks already—do you enjoy writing them? Is it quite stressful?

VS: It’s not stressful. This is number six. My last cookbook in 2014 was Spice at Home, and it kind of touched on the weird, wacky and twisted cooking that goes on in our household, where there are so many different influences and how they come together in ways that we cannot expect or imagine. That was Spice at Home, and then this, Indian Festival Feasts, focuses more around the way these festivals are expressed and celebrated back in India—or certainly my interpretation of that.

Q. What inspired you to launch your restaurants in London? Was London lacking in the Indian food that it offered?

VS: I thought there was so much more to be explored and discovered in Indian food that wasn’t necessarily being practiced in restaurants. They were pretty middle of the road, unimaginative, not as daring, not as challenging of the status quo 15 years ago. So the audacious idea of the Cinnamon Club was born 15 years ago. And I remember how much flack we got, I mean we got a lot of praise but also a lot of flack—was it really authentic, or was it taking Indian food to a level where it doesn’t need to go or in a direction where it doesn’t need to go? Esquire came up with a list of 15 or 10 most authentic [Indian restaurants] in the UK and it had Cinnamon Club in there. So I sent a tweet saying: ‘From inauthentic to authentic…what a journey.’ So what it has done is actually, what seemed visionary at the time, actually became de rigueur. Everybody expects good produce, everybody expects us to buy and use things seasonally, everybody expects things to be freshly cooked and served with a bit of care and love. We’ve come a long way.

Q. What do you think the next frontier is in Indian cooking?

VS: Going from being—I mean clearly it was 15 or 16 years ago—the nation’s favourite cuisine, if not the top, probably the number two favourite cuisine…Indian cuisine was the cuisine of choice, it still is, and some of that will forever remain. I don’t think that’s got anything to do with chefs of my generation or the kind of cooking that goes on. That affection, that affinity, understanding and love for Indian food—and all things Indian in this country—I put that down to the affection that the British public have for the days of the Raj. I call it the romance of the Raj, there is a place for lots of Indian things, food included, cinema, music, whatever. And that will never go away, but in terms of restaurants and dining experiences I think the last 15 years have been a lot about pushing boundaries, exploring lesser-known territories, lesser-known areas and places and lesser-known recipes. There’s a lot more understanding and awareness. You can’t really pull the wool over people’s eyes anymore, there’s that much more knowledge and there’s that much more shared on social media. The last few years have been a dual journey, a journey of exploration but also rediscovery. Now the next frontier is going to belong to people—not necessarily of Indian background and Indian regions—cooking Indian food because they like it and love it and are willing to explore the mystique of spice. •

What to Do When Planning a Cremation