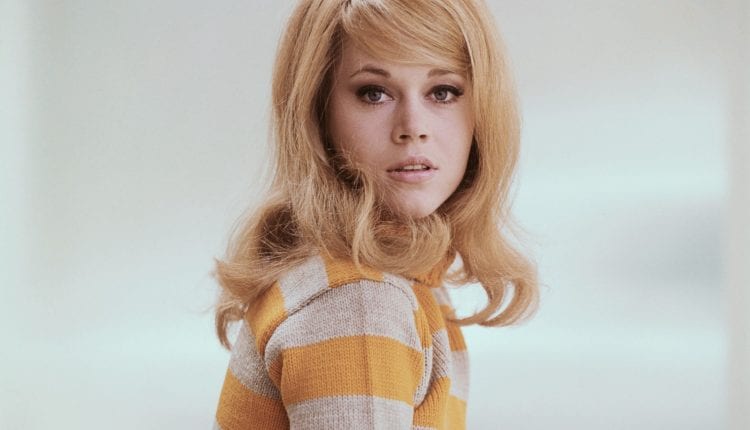 With news that American actress and activist Jane Fonda is to be honoured with the Cecil B. deMille Lifetime Achievement Award at the 2021 Golden Globes in February, we thought we’d look back at her glittering 60-year career.

The Hollywood Foreign Press Association (HFPA), which organises the Golden Globes, made the announcement on Tuesday 27th January.

83-year-old Jane Fonda will take the stage at the Beverly Hilton on February 28th to accept the award, for her outstanding contributions to the world of entertainment. A star of movies and TV as well as a prominent campaigner on social issues, Jane Fonda is already one of the most decorated actresses in Golden Globes history, as she has earned 15 nominations and has won seven including in 1962 for Tall Story, 1972 for Klute, 1978 for Julia, and 1979 for Coming Home.

Born in New York in 1937, Jane Seymour Fonda was the daughter of actor Henry Fonda and Canadian-born socialite Frances Ford Brokaw (née Seymour). She was named for the third wife of Henry VIII, Jane Seymour, to whom she is distantly related on her mother’s side. Jane’s mother died by suicide in 1950. Her brother, Peter Fonda (1940–2019), was also an actor.

Jane Fonda’s first acting performance was in a charity performance with her father, but she became seriously interested in acting after dropping out of Vassar, a trendy private college in New York, and meeting Lee Strasberg of the Actors Studio. Stage work in the 1950s led to her movie breakthrough in the 1960s.

Early movies included 1960’s Tall Story, in which she recreated one of her Broadway roles as a college cheerleader pursuing a basketball star, and Walk on the Wild Side in 1962 which earned her a Golden Globe for Most Promising Newcomer.

Her breakthrough came with comedy Western Cat Ballou in 1965, but her reputation as a se symbol was cemented by French sci-fi spoof Barbarella in 1968. Yet she continued to pursue more serious roles such as the tragic role in 1969’s They Shoot Horses, Don’t They? which earned her the New York Film Critics Circle Award for Best Actress and her first Oscar nomination for Best Actress. She turned down parts in Rosemary’s Baby and Bonnie & Clyde.

So powerful were her performances that she dominated the 1971 murder mystery Klute despite playing a supporting role.

Around this time Jane Fonda started to developed a voice as a political activist, and campaigned vociferously against the Vietnam War, earning herself the nickname ‘Hanoi Jane’. She resisted suggestions that this along with her support for the civil rights movement, feminism and Native American issues damaged her movie career, while admitting that her activism drew her attention away from film-making, and that photos of her with North Vietnamese soldiers had sparked resentment among some American which persists to this day.

Nonetheless she made a significant comeback in 1975 in the comedy Fun with Dick and Jane, as well as starring in many issue movies such as Coming Home, California Suite and The China Syndrome.

Her star power was maintained throughout the 80s with movies such as On Golden Pond and 9 to 5, but she made no movies for 15 years after 1990’s Stanley and Iris.

But meanwhile Jane Fonda had developed an extraordinary second career as a fitness guru, kicking off the video craze of the 1980s with her Jane Fonda’s Workout tape, the first of 23 workout videos she would release accumulating sales of 17 million.

In her private life, Jane Fonda married the director of Barbarella, Roger Vadim, on 1965, and they separated in 1972, with one daughter, Vanessa, now a director and environmentalist. Jane Fonda also dated actors James Franciscus, Donald Sutherland and Warren Beatty, and married activist Tom Hayden in 1973. They had a son, Troy Garity, who is an actor, and separated in 1988.

Her third marriage, to founder of CNN Ted Turner, lasted from 1991 to 2001, and in 2017, when asked what she had learned about love, Jane Fonda told Entertainment Tonight: “Nothing. I’m not cut out for it!”

She was one of fifteen women selected to appear on the cover of the September 2019 issue of British Vogue, by guest editor Meghan, Duchess of Sussex, and in 2019, she was inducted into the National Women’s Hall of Fame. The following year she was part of the BBC’s 100 Women season announced in November 2020.

Jane Fonda’s most recent appearances have been with Lily Tomlin in the Netflix comedy series Grace and Frankie, which she has starred in since 2015. This earned her a Primetime Emmy Awards Nomination for Outstanding Actress in a Comedy Series.

The 78th Golden Globe Awards will be held at The Beverly Hills Hilton on Sunday, February 28 and will air live on NBC with hosts Tina Fey and Amy Poehler.

So when American actress and activist Jane Fonda is honoured with the Cecil B. deMille Lifetime Achievement Award at the 2021 Golden Globes in February, which parts of her glittering 60-year career will you remember?